Thank you is inadequate for this revolutionary treatment

Richard recalls how cell transplants made him the first Type 1 diabetic in the UK able to stop taking insulin. It followed several years of experiencing hypo unawareness. He says the treatment is still benefiting him - and his family. 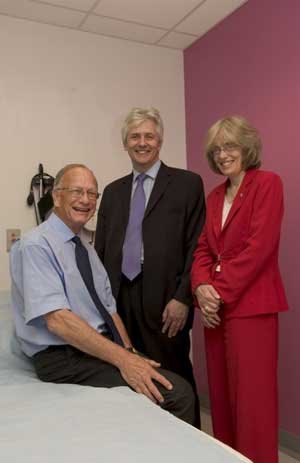 Richard Lane is Ambassador for Diabetes UK. He is a living example of how Diabetes UK-funded research and treatment makes a difference to people’s lives because he was one of the first people in the UK to receive islet cell transplants in 2005. Without the generosity of people who remember Diabetes UK in their Will, this medical advancement may not have been possible.

This photo was taken in March 2005 in King’s College Hospital when it had just been announced that Richard, then 61, had had the first successful islet transplants in the UK - and would be able to be taken off insulin. He is pictured with Professor Nigel Heaton, senior Liver Transplant Surgeon at King’s, and Professor Stephanie Amiel, the RD Lawrence Professor of Diabetes, who led the transplant team.

Richard says: "I had symptoms for two years before I was correctly diagnosed as having Type 1 diabetes. I was always tired, but I put it down to the long hours I was keeping. My doctors told me I had depression. My symptoms got worse and worse to the point I couldn’t stand up straight without feeling I was going to fall over.

"I was drinking 10 or so litres of water a day – anything to get rid of the burning in the mouth – and my eyesight went out of focus. I lost two stone in two weeks and was virtually in a diabetic coma. I went to a different doctor, who asked for a urine sample, something I’d never been asked for before. I thought I had cancer. He came back into the room and said, “You’ve got diabetes”. I remember shouting, ‘hurray!’ as I had no idea what it was and was just glad it wasn’t cancer!

"Virtually from the beginning I had very little warning of hypos, finishing up with no warnings at all. Around this time, I met the lady (a nurse), who would become my wife. She became an incredible influence on me. She was able to spot as soon as I started to go hypo and she would immediately make me sit down and treat it. She wouldn’t take no for an answer when I would try to insist that I was all right. Because that’s how you become. You are not rational.

"I would try to forestall the hypos by eating lots of carbohydrates, but it wasquite difficult. I had to give up playing cricket and hockey, things I really loved doing as it could often take me several days to recover from a game.

"My unawareness started to become worse and worse and I had lots of hypos when I wasn’t with anyone who knew me and strangers would often think I was drunk. I started slipping into comas without noticing and I woke up in lots of different funny places.  I had a bad car crash after going into a coma while driving and I broke my back in two places.

"It was a terrible time for my family. My children had seen me slip into a coma and it was very upsetting for them. It got to the point where my wife wouldn’t sleep as she was afraid I would go into a coma during the night.

"By September 2004 I was experiencing an average of six serious hypos each week, all with little or no warning, and often woke up in different hospitals, both in the UK and abroad, having gone into coma.

"I was under the care of Professor Stephanie Amiel from Kings College Hospital London, who had pioneered the islet cell transplants as part of a reserach project funded by Diabetes UK. She said: "This can’t go on; you should be down for a whole pancreas transplant, but I’m developing this new treatment which I think would be perfect for you.” We just jumped at the chance.

"I had to go through two months of tests and my wife was involved and educated as I was, as it was a research project. It was a scary and emotional time, with a lot of highs and lows as I waited for a suitable donor. The final transplant was a success. I received three islet cell transplants. As a result, I became the first Type 1 diabetic in the UK to be able to stop taking insulin. Although I am currently back on insulin, dispensed through an insulin pump, the treatment continues to provide me with the main benefit that I had hoped for, namely the return of my warnings of hypos.

"As a result, I now enjoy an astonishing transformation in the quality of my life. I still feel unbelievably fortunate to have been able to benefit from this life-changing operation by being in the right place at the right time and under this wonderful consultant. My life has changed dramatically, as it has for my family.

"My children can’t believe how lucky we all are, for the treatment I’ve had and for the difference it has made to us all. For my wife in particular, life has changed unbelievably for the better, because, for example, she can now sleep properly at night because I’ve got my warnings back.

"Islet cell transplants are now deemed to be the mainstream treatment for people with Type 1 diabetes who have lost their warnings of hypos, and a good number of such patients have received successful transplants since I received mine. Further developments involving the use of stem cells to counter the shortage of organ donors are promised in the future, which is very exciting.

New possibilities for others

"Unsurprisingly I am extremely passionate about research. The islet cell transplant procedure is being refined all the time, and the most exciting development is around the creation and protection of insulin producing stem cells, possibly from the patients’ own DNA, which would produce an unlimited supply of such cells, meaning that there would be no need to have to rely on the unpredictable donations of human cells.

"The big advantage of this could be that when this exciting research has been completed and perfected, patients might no longer require immuno-suppressant drugs. These drugs carry quite a lot of risk and so currently can’t be given to children. I would give everything I own to see some happy children with Type 1 diabetes, and their parents, together with adults with Type 1 diabetes benefit from this or similar treatment, because to my mind – when it has been perfected – it will be tantamount to a cure!

"Diabetes UK funded the research into this extraordinary and revolutionary treatment, and I will never be able to say “thank you” adequately to the charity and to the medical professionals involved, for this incredible transformation in my life.’’

Richard has chosen to leave a gift in his Will to Diabetes UK. Gifts in Wills are a lesser known way to support Diabetes UK, but they are equally legendary acts because charitable legacies are vital for continuing our work. To learn more about gifts in Wills, please go to thelegacy page.