Having stepped down from his role as President of Diabetes UK in Dec 2015, a position he assumed in 2008, Richard is now the charity’s first ever Ambassador. In his new role Richard will be continuing his tireless work for Diabetes UK, supporting the charity to nurture relationships with key supporters. 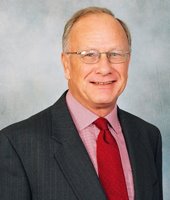 Richard, from Bromley, Kent, has had Type 1 diabetes since 1976. Between September 2004 and January 2005, he received three islet cell transplants at King’s College Hospital and became the first Type 1 diabetic in the UK to be able to stop taking insulin. While President of Diabetes UK, Richard has travelled over 35,000 miles for the charity – an equivalent of more than once round the world.

Richard is currently back on insulin, dispensed through an insulin pump, but the treatment continues to provide him with an astonishing improvement in the quality of his life, and in the lives of his wife and family.

Richard is a regular speaker across the UK and Europe about his ground-breaking treatment, and about Diabetes UK and diabetes generally. He regularly speaks at volunteer, patient and healthcare professional conferences and at Diabetes UK’s voluntary groups.

Chris Askew, Chief Executive of Diabetes UK, said: “We are delighted that Richard will continue to play an important part in our work as Ambassador for Diabetes UK.”

Find out more about Richard Lane and his islet cell transplants