Former NHS Chief Executive David Nicholson shares his experience of being diagnosed with Type 2 diabetes and why he found diabetes education a "genuinely life-changing" experience. 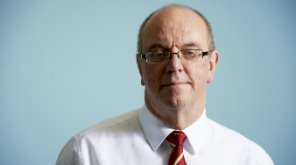 There were about 20 of us sat in a rather austere classroom presumably designed for rather younger and slimmer people.

I say that because we were a mixed group, men, women, old, older, obviously frail and robust, all quietly watching with some trepidation as our teachers started COMPLICATIONS WEEK!

We were all on week four of the EXPERT patient programme for newly diagnosed people with Type 2 diabetes. The nurse took us through the lot, heart failure, stroke, kidney failure, amputation etc. This is a very nasty condition; it’s not for nothing it’s called the silent killer. The jolly bonhomie that had characterised the session so far evaporated. This is serious!

For me this had all started some three months earlier after a visit to the GP, a very rare visit to my GP, had resulted in the diagnosis. I’d felt a bit under the weather for a while punctuated by a regular need to go for a wee so Christmas Eve seemed a good time to go. A quick recounting of symptoms, a blood test, a urine sample, standing on some scales and a few lifestyle questions resulted in a provisional diagnosis.

The GP, who was great, said: "This is a serious disease but one, if we work together, that can be managed but I guess, for the first time David, you are going to have to take control of your own health."

Like the disease itself, it only gradually creeps up on you just how serious all this is. After Christmas we got the definitive diagnosis and the need for further tests, liver and kidneys. A further session with my GP and specialist nurse ensued.

I was, from the beginning, determined to respond to the GP’s challenge of taking control and whilst I recognised the benefits of statins for men over 50, I didn’t want to go down the road of medication for Diabetes. I wanted to take control by diet and exercise – simple!

The GP was sceptical – very sceptical .The kind of job I did, constant travelling, eating out, staying in hotels etc. did not seem conducive to the kind of discipline and routines required. Plus, to be fair, there was nothing in my past that indicated I could successfully change my lifestyle.

The nurse, interestingly, was much more encouraging and between us we persuaded the GP that we should give it a try. Even writing it down now, the whole thing seems bizarre, the nurse and I felt we had to persuade the doctor – that was my first lesson on what it felt like trying to take control.

I then went into overdrive in gathering information about diabetes; there are huge amounts of it available, much of it technical. Although the best and most helpful for me were on the Diabetes UK website, not the prepared stuff, as excellent as it is, but the blogs – some of them quite old but of real people wrestling with the same problems I was.

Which brings me back to the expert patient programme; I got my invite within a couple of weeks and booked myself on it. I was surprised and relieved that there were no great self-introductions required. I’d dreaded explaining who I was and what I did and although the staff who delivered the course knew who I was, the good people of Kidderminster didn’t give it a thought. Indeed, one lady mistook me for a local butcher.

Nevertheless, it was excellent, thorough, though I think quite difficult to pitch. There were people there who wanted to understand the detailed physiology and biochemistry, while there were some who literally just wanted to be told what to eat.

For me, I wanted a little more detail but used it to fashion a few simple rules. There was some resistance to this, particularly from the dietician who was quite rightly running a one man campaign against diabetes myths and gave us permission to eat almost anything but against the background of a healthy diet.

I knew, however, that for me, who had an almost limitless ability for self-deception where food is concerned, permission wouldn’t work.

This, coupled with regular measurement of blood sugar and weight, has done the trick. Now I know it’s hardly text book but the whole point was for me to take control.

Indeed, not everyone in the group took that route. Where I think the programme did lack was in the psychological side of having a long term condition; the fear of complications together with a feeling of helplessness can be debilitating.

Nevertheless, the whole programme, meeting others and feeling that you were not the only person facing these issues was genuinely life changing.

None of this should of course been a surprise to me; I was, after, all chief executive of the NHS. I had a few months before been given ahard time by the Public Accounts Committeeon lack of progress on improvements in diabetes care, aided and abetted by Barbara Young, Chief Executive of Diabetes UK, a formidable individual who is a huge ally for people with diabetes but not always of Chief Executives of the NHS.