Gearing up for adventure 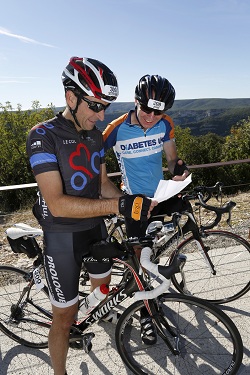 John Grummit (right) on a previous cycling challenge in 2013

At Diabetes UK we recommend people with diabetes follow a healthy lifestyle to help them manage their diabetes better. But what if, like Diabetes UK’s Vice President, John Grumitt, 49,  you aren’t content with visits to the gym, walking the dog or a cycle ride in the park? What then?

So John you’re nearly 50, having lived with Type 1 diabetes for over 20 years and yet you are absolutely determined to push yourself to your limits. Tell us what you are up to?

I’m heading off to do a 560k non-stop bike ride from Trondheim to Oslo in June, which will take between 36-48 hours.

Because it is so far north and during summer, it should pretty much be daylight all the time but of course I will still be having to cope with two nights without sleep and all that time on the saddle.

That’s just for starters because then the plan is to do the mHealth Grand Tour from Brussels to Geneva via Paris in September! It’s nine days, 22,000 metres of ascent and a real challenge. I participated in the first mHealth Grand Tour from Brussels to Barcelona in 2013 and found it was really well organised with great support for people with diabetes too. I would thoroughly recommend it. For more details go tomhealthtour.com.

Why would you want to put yourself through all of that?

There are a few reasons. One is I love cycling and I love extreme sport. When I was diagnosed with diabetes in my 20s, I thought that I’d have to put that behind me and to be honest, what with bringing up a family, it all got put on the back burner. But after speaking to a lot of people and tracking down diabetes experts like the diabetologist Ian Gallen, who has worked with top athletes includingSir Steve Redgrave,  I realised I didn’t have to let my diabetes stand in my way. When I went into his office I told him I hadn’t a clue how I was going to do all this endurance cycling but I wanted to try. He told me that his last patient was a woman with Type 1 diabetes who had just swum the English Channel and if he could enable her to fulfil that goal he was sure he could help me to reach mine. His website is runsweet.com. I also hope that by taking on these challenges, I can show how diabetes does not need to be a barrier to doing anything you want to do.

So what is your regime?

I have a pump and a continuous glucose monitor system and when I’m exercising at this level I have to graze pretty much continuously. I have hypo-unawareness, which means I can no longer spot the early stages of a hypo. When you are really pushing yourself and you are hot and sweaty and drained then its’ hard to tell if it’s a  hypo but or the exercise and that’s  really dangerous. For me what works is to only have about 10 per cent of the insulin I would normally take on board and then I need to take on board at least 50g of carbs an hour when I’m doing this level of exercise. If I do go ‘low’ on an endurance challenge I find I need about three times the usual corrective carb input to bring my blood sugars up and that be quite a challenge as it can seem like obscene amounts! I have been advised by an amazing diabetes dietician, Karin Hume, who has done the endurance Marathon de Sables amongst other things, so she really understands what the body needs and I totally trust her.

What are the low points?

I hate having to set my alarm for 3am in the morning after a gruelling day and another one to follow but after exercising at this level all day, I have to test my blood glucose regularly and adjust if necessary.  When your body is crying out for sleep, it’s the last thing you feel like doing!

What has surprised you from taking part in these endurance events?

You do realise how incredible the human body and mind is that it can do so much, even with diabetes. When I did my first endurance event, which was cycling ride from John O’Groats to Land’s End with former Olympic rower James Cracknell, I read about a rower from the Cambridge team in Balance who was also doing the event. He said he didn’t want to tell anyone about his condition as he didn’t want anyone to treat him any differently. It made me wonder if I had done the right thing as I do tell people about my diabetes just so they’ve got an idea of what to do if I have a problem. This led me to ask friends with whom I completed a multi day challenge  whether they felt that me telling them about my condition made them feel like they needed to worry about me and whether this additional demand impacted on their achievements. I asked them separately and each one said pretty much the same thing, which was  when they had been about to give up or felt they couldn’t go on, they ended up deciding that if their mate with diabetes could do it then so could they. So actually my diabetes had been a really positive thing to help them battle through!

What is your attitude?

The way I look at it I’m someone with a passion for cycling and challenging myself who happens to have diabetes. I’m some one who loves the outdoors and  cycling and happens to have diabetes. It is the former that defines me not diabetes and I think that’s the right way to be. When you go to the edge of your limits you end up redefining the barriers.