On the eve of World Health Day we are calling on men of all ages to go online to find out their risk of Type 2 diabetes, with the support of members of West Ham United first squad and legendary coach Tony Carr MBE.

We are urging more men to use the Diabetes UK Know Your Risk online tool after findings from one million visits showed that 38 per cent more women than men are using the online tool, despite men being at greater risk of developing Type 2 diabetes. 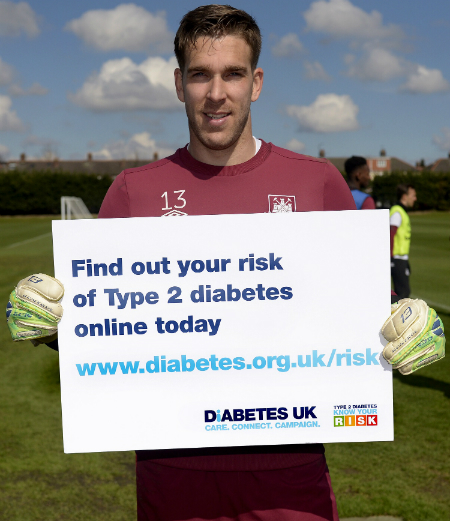 Based on the key risk factors for Type 2 diabetes such as age, gender, weight, waist measurement and ethnicity, it gives a calculated analysis of an individual’s risk of having or developing this serious health condition in the future which, if left untreated or poorly managed, can lead to devastating complications such as amputation, blindness, heart attack and stroke.

Backing men to 'Know Your Risk'

Legendary West Ham coach Tony Carr MBE, West Ham captain Mark Noble and players from the first team squad are backing Diabetes UK’s campaign to get more men to ‘Know Your Risk’ and took part in a photo call over at the training ground to raise awareness of a cause very close to the teams heart. 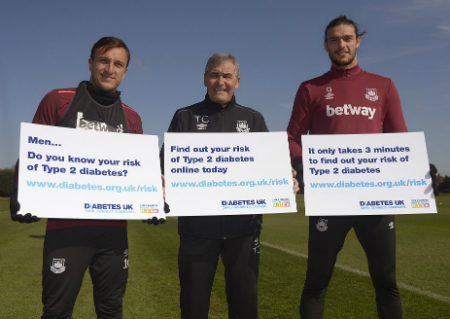 Helen Dickens, Head of Prevention at Diabetes UK, said: “We recently reached an incredible milestone of one million uses of our Know Your Risk tool, which gives people the opportunity to go online and find out their risk of Type 2 diabetes. When we analysed who had used the tool we were very interested to see the gender split of users, with a third more women than men going online to find out their risk, despite the fact that men are at greater risk of developing Type 2 diabetes. We are therefore particularly calling on men to get online and find out their risk.

“A staggering 11.9 million people in the UK are now at increased risk of developing Type 2 diabetes. However, the good news is that when an individual knows they are at increased risk they hold the power to turn this around by making relatively simple lifestyle changes. This is why it is so important to get online now to find out your risk of Type 2 diabetes and then take any necessary steps to reduce this risk, as not doing so can lead to devastating consequences. Too many people are living with this serious health condition and enduring complications such as amputation, stroke and blindness – a huge human price to pay that could have been avoided in many cases.

“With no time to waste, it is fantastic that West Ham legends have got behind our call to men to get online now so they can understand their risk of Type 2 diabetes, and if they are at increased risk, take crucial steps now to give themselves the best chances of living healthy lives.”

Noble: "It only takes a few minutes"

West Ham’s captain Mark Noble told us: “It only takes a few minutes to check your risk of Type 2 diabetes with Diabetes UK’s online test. If you haven’t already, get online and use it. If you are at risk of Type 2 this test gives you the chance to take action now. Taking care of your health isn’t just important for footballers: everyone needs to look after themselves – so check it out!”

If people are shown as being at moderate or high risk, we are urging them to go and speak to their GP or nurse, where further testing can be arranged. There is also a wealth of advice on the Diabetes UK website on preventing and managing Type 2 diabetes which is a complex and often misunderstood condition that, which, unlike Type 1 diabetes, can often be prevented through eating well, staying active and maintaining a healthy weight.

Find out your risk of developing Type 2 diabetes using theKnow Your Risk toolnow.