MPs an inch or two from diabetes?

Diabetes UK held an awareness day in Parliament on Wednesday 18 October to offer advice and support to parliamentarians and staff who work in and around the parliamentary estate.

Diabetes UK awareness day was centred around the 'Measure Up' campaign, which highlights waist measurement as a risk factor for Type 2 diabetes. Over 200 people including around 100 MPs attended.

Pictured above is Diabetes UK Chief Executive Douglas Smallwood with Rosie Winterton MP, Minister for Diabetes. Adrian Sanders MP, Chair of the All Party Parliamentary Group for Diabetes, is pictured below getting 'measured up'. 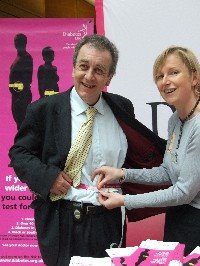 Research has shown that a large waist could mean you are up to twelve times more likely to develop diabetes. At risk waist measurements are 37 inches or more for men, except those of South Asian origin whose waists should not exceed 35 inches, and 31.5 inches or more for all women.

With an estimated 750,000 people that have diabetes but remain undiagnosed, it is more important than ever to raise awareness of the risk factors and identify people early.

Douglas Smallwood said, “We are pleased to be welcomed so warmly in parliament.  Members of the All Party Parliamentary Group for Diabetes, Ministers and Shadow Ministers came along to show their support and get measured up themselves.

"It goes to show that there is political will to do more to get people diagnosed.  We would like Primary Care Trusts to put plans in place to identify people with diabetes.  The longer people are left undiagnosed, the higher their risk of heart attacks, blindness, kidney failure and amputations.”

In support of Measure Up, Prime Minister Tony Blair said, “I was pleased to learn that (Diabetes UK) will soon be launching an awareness campaign to highlight that obesity is a risk factor when it comes to Type 2 diabetes.

"The Government values the dedication and application of Diabetes UK in addressing diabetes issues. I wish you a successful awareness campaign.”