The evening saw five fights take place: Stuart Kemp beat Aaron Lyall in the fourth round of the featherweight due to fatigue; David Allan beat Jason Pierpoint based on the referee’s decision at the end of the fifth round of the lightweight; Mark Mcleod and Adam Cozens drew after five rounds; Mark Hawthorn won by default in the second round of the welterweight after opponent Andrew Whitmore dislocated his shoulder; and the eagerly awaited heavyweight match saw organiser Ryan Boyd retire in the second round after a knee to the ribs by opponent Alastair McKee.

Tribal dance, the British Army and an after-party

As well as egging the fighters on, the 500 guests were entertained by tribal dance and music courtesy of the British Army, talks from Zoë Steer from Diabetes UK South West and ex-professional boxer Glenn Catley, who also refereed the matches, and an after-party at the Opa Meze bar.

Ryan organised the fundraising fight after his granddad died of diabetes complications, aged 64, six years ago.

"While growing up I only ever knew him being ill and taking medication. Always a very proud and very strong man, I never knew to what extent he was ill until I got older and had a better understanding," explains Ryan.

"He had issues relating to his kidneys, water infections and blood pressure; all of which were linked to diabetes. My grandfather was in and out of hospital for many years getting regular check-ups and receiving various types of treatment. The last two to three years of his life were pretty much spent entirely in hospital.

"I am really chuffed the evening came together so well and we managed to raise so much. Funds are still coming in so I hope we’ll be able to reach our target of £10,000." 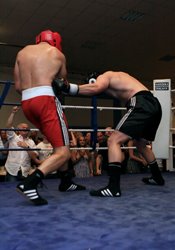 Zoë Steer, Diabetes UK South West Regional Fundraising Manager, said: "We are so grateful to Ryan and his colleagues for organising such a brilliant evening although it was really difficult being surrounded by so many muscly men! They’ve all raised such a fantastic amount and it’s hard to overstate how important the money is in helping us support people with diabetes in the South West.

"More and more people are being diagnosed with diabetes every year and Diabetes UK is dependent on amazing people like Ryan who really put themselves out to help us."

Ryan’s colleagues at London and Country Mortgages offered to take part as complete amateurs and dieted and trained hard over the past few months. They paid for their own tuition through local boxing clubs around Bristol, Bath, Swindon and Trowbridge.

The photos from this story are courtesy of Pete Gettins; many more shots of the night can be viewed in hisonline gallery. 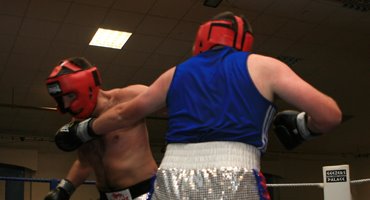