Thank you to our Liverpool Marathon runners

Thank you and congratulations to our 20 volunteers who ran the 26-mile Liverpool Marathon yesterday.

Their hard work and determination is expected to raise more than £8,000.

The route of the marathon was lined with Liverpool’s iconic landmarks, and included running through the historic Mersey tunnel. At the finishing line, runners were greeted with well-deserved cheers and sounds of music from The Beatles.

In memory of Barry McLeod

Among those taking part for Diabetes UK were Captain Gregg McLeod and Major Ross McLeod, from West Kirby. The brothers, who are both officers in the British Army, were running in memory of their father, a former Merseyside police officer, who died from complications of Type 2 diabetes a few weeks ago.

Gregg (29) and Ross (33) paid tribute to their father, Barry McLeod, by completing the 26.2 mile marathon then continuing with a police motorcycle escort to Anfield, the home of Liverpool Football Club, as Barry was a massive supporter and provided police support for hundreds of games during his 32 years with the Merseyside force. Gregg decided to complete the run in his Dad's old police uniform.

Barry McLeod, who was born in Liverpool and moved to West Kirby in 1982, was diagnosed with Type 2 diabetes in 1998. In February 2010 he had one leg amputated as a result of his diabetes; he lost his second leg in October 2010. Barry died on Tuesday 30 August at the age of 64.

Gregg said, "Diabetes is such a common but misunderstood condition and I for one never knew how serious it was until it was too late for Dad, so I’m hoping my Liverpool Marathon challenge will raise awareness of diabetes. I’m also raising money to help Diabetes UK educate more people about how to manage their existing diabetes and prevent people at risk of diabetes from developing the condition or suffering complications.

If we can change one person's future then it's a success

Ross added: "I think we both want to ensure people understand the benefits of a healthy lifestyle and a balanced diet. Running in a marathon enables us to do this while ensuring our own fitness is up to a high standard. If we can change one person’s future then it's a success."

Diabetes UK North West Regional Fundraising Manager, Kirsty Daniels, said, "On behalf of everyone at Diabetes UK I would like to convey our thanks to Ross and Gregg for their marathon efforts. The funds they raise will go a very long way in helping us continue to support the 2.8 million people diagnosed with diabetes in the UK, help us find the estimated 850,000 people who are unaware they have Type 2 diabetes, and fund research into finding a cure.

Ross and Gregg are running the London Marathon in 2012: to support them in their fundraising efforts for Diabetes UK, please visittheir JustGiving page. 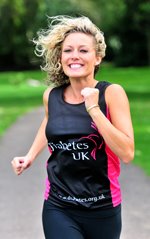 Former Brookside star Suzanne Collins also ran the Liverpool Marathon and raised funds for Diabetes UK in the memory of her mum, Carolynne.

Suzanne said, "I know first-hand the impact diabetes can have on people, as my mum had Type 1 diabetes. I ran the London Marathon in 2002 for Macmillan Cancer Support and at the time, my mum said that if I did it again, I should support Diabetes UK."

Suzanne completed the marathon in 5 hours and 45 minutes and said, "The public support on the day was amazing and hearing people cheer made all the difference." She also wanted to encourage people to get involved and said, "If I can do it, anyone can."

If you would like to take part in next year’s marathon, please contact Diabetes UK North West on 01925 653281, or emailn.west@diabetes.org.uk.