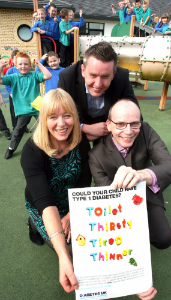 Raising awareness about diabetes in Northern Ireland comes in many forms - perhaps there is something you can do to help?

Diabetes is a complex condition and there is still a lot of work to be done in terms of raising awareness of the condition. Diabetes UK Northern Ireland often use the media to make people aware of the seriousness of diabetes.

This can involved undertaking activity to raise awareness of the complications of diabetes and how they can be avoided e.g. a campaign about retinopathy screening will aim to reduce the number of people missing their screening appointments.

There are occasions where Diabetes UK Northern Ireland wish to draw attention to an area of diabetes care which we feel could be improved.

It is estimated that there are currently thousands of people in Northern Ireland who have diabetes but are unaware of it. Diabetes UK Northern Ireland is committed to increasing awareness of the symptoms of diabetes and ensuring anyone who has the condition is diagnosed early and complications are prevented.

In all of the above situations we need people living with diabetes to tell their stories - people are more inclined to listen or read about someone going through the experience than a spokesperson from the charity.  If you would like to register your interest please contact ourMedia and Communications Manager.

Diabetes UK Northern Ireland also offer stands manned by the charity or our voluntary groups at external events such as melas, county fairs or health promotion days. From time to time, we also feature events run by other organisations, also helping to raise awareness about diabetes.