Este Haim, singer and bassist of the internationally successful music trio Haim, formed the band with her two sisters, Danielle and Alana. However, living with their success wasn't always easy, and Este has to be careful managing her Type 1 diabetes. 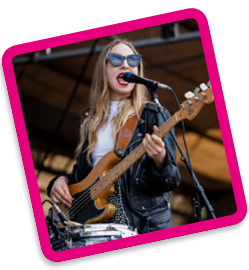 Diagnosed at the age of 14, she had some of the signs of diabetes and felt very thirsty, had blurred vision and lost weight. At first, she struggled to get her blood glucose (sugar) levels under control.

Este has spoken about her life with Type 1 and said, "I was diagnosed with Type 1 diabetes in 2000 and from then it was my dad's mission for us to play as many charity gigs to help find a cure for diabetes.

"The trick is to stay as healthy as possible. There are times when I think – 'Why do I have to put up with this and nobody else has to deal with it?' But it has become part of my life now."

Diabetes hasn't stopped Haim from breaking out onto the official charts across the globe and becoming a very successful band.

Earlier this year Jen Grieves managed to catch up with Este Haim backstage and record this fantastic interview.