Alison lost her toe and is supporting the Putting Feet First Campaign to make sure we can help prevent more amputations.

The surgeon came round and confirmed the inevitable…I am now down to nine toes. 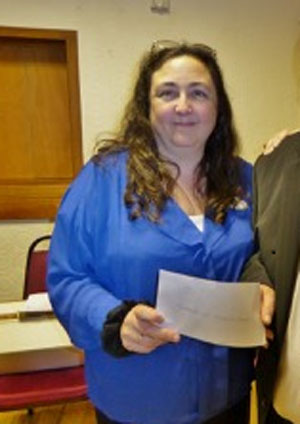 I was diagnosed at the age of 9 with Type 1 diabetes, and it was quite difficult being the only pupil with diabetes in a primary school of 300. I rebelled against the condition throughout my teens as I just wanted to be normal.

I worked as a security officer on the Olympic and Paralympic Games in 2012. During this time I had a wet corn on a toe. The corn was being treated.

I knew how what I had to do and how to dress the wound daily, having been shown by a hospital chiropodist.  I made regular appointments with my GP surgery nurses so that they could keep an eye on it to keep it infection free. It had so nearly healed when I went to work away from home in London.

We worked 12 hour shifts and then travelled to and from our accommodation, at least an hour’s travel away. I felt an infection spreading up my leg caused by the long hours standing and wearing boots. On my return home, I sought medical attention. The practice nurse did not like the look of my toe so called in a doctor.

After antibiotics didn’t help, I was given a letter to take directly to the hospital. The doctor who saw me was quite brusque and told me that I might lose my toe.  Well, having lived with this possibility for 30 years the thought of this happening had already crossed my mind.

I was kept in overnight and given IV antibiotics. Late into the evening the surgeon came round and confirmed the inevitable. You've guessed it, I'm am now down to nine toes. When the surgeon came round a couple of days later to inspect the wound, he was really kind and mindful of how I must have been feeling. He reassured me that the operation went well and that there were no complications and in time the wound would heal.

It took three months to heal and then I went back to work on event security. Approximately 12 months later I had a problem with my other foot which turned out to be a slightly more rare complication of Diabetes (the Charcot Joint).

I attended the 135 shoes display in Westminster in 2015 to raise awareness of the shocking number of amputations that take place in England every week.

I shared my story in several media interviews, including a feature broadcast on Channel 4 News, which was very widely viewed and was also picked up online. This helped spread awareness about amputations and the campaign throughout the UK.  Although I did not meet my MP (Jim Cunningham) on the day of the event, I spoke to representatives from his office, asking them to keep funding for the NHS high on the Government agenda. As a result, Mr Cunningham has asked a series of questions about diabetes foot care in Parliament.

Find out how you can join the Putting Feet First Campaign like Alison.

I shared my story in media interviews…this helped spread awareness about amputations.