Theresa May: "Type 1 doesn't change what you can do"

Despite showing the classic diabetes symptoms, Home Secretary Theresa May put them down to her hectic schedule during the London 2012 Games. Now diagnosed with Type 1, she reveals how she hasn’t let the condition affect her demanding role.When she came down with a heavy cold in November 2012, Home Secretary Theresa May’s first thought was that she should get it checked out by her GP. Her husband had just had a similar cold that had developed into bronchitis, so it made sense for her to get it looked at before the same thing happened to her. But she had no idea that this was a visit to the GP that would change her life forever.

While she was there, she mentioned to her GP that she had recently lost a lot of weight, though she hadn’t thought much about it and had put it down to “dashing about” in her role as Home Secretary. But the GP decided to do a blood test anyway. Suddenly, she was being told that she had diabetes.

The news came as a shock, though looking back she realises she had some of theclassic symptoms. As well as the weight loss, she was drinking more water than usual and making more frequent trips to the bathroom. But, it wasn’t something she thought about much at the time. “That summer was the Olympics, so life was in a different order,” she says. “There was a lot more going on, so I didn’t really notice.”

A change in diagnosis

She was diagnosed withType 2diabetes, but, when the medication didn’t work she went for further tests and, eventually, the news came back that she hadType 1.

“My very first reaction was that it’s impossible because at my age you don’t get it,” she says, reflecting the popular misconception that only younger people get diagnosed with Type 1. In fact, one in five people diagnosed with Type 1 are over 40 when they develop it. “But, then my reaction was: ‘Oh no, I’m going to have to inject’ and thinking about what that would mean in practical terms.”

The change in diagnosis meant switching from taking tablets to two insulin injections per day, which has now increased to four. And while she was already aware of the condition – a cousin developed it as a teenager – like anyone with diabetes, she had to quickly learn what managing it meant in practical terms.

“I hadn’t appreciated the degree of management it requires and I hadn’t appreciated, for example, the paradox that while everyone assumes diabetes is about not eating sugar, if you have a hypo, then you have to take something that’s got that high glucose content.” 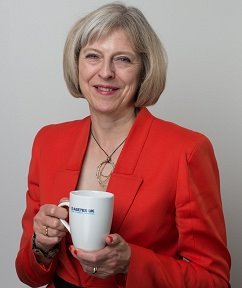 The Home Secretary has learnt to cope with her condition

And, while managing diabetes can be tough for anyone, juggling it with the job of being Home Secretary presents unique challenges. “The extra issues for me are that I eat out a lot,” she explains.

“I go to a lot of functions where I am eating and I speak at dinners, so that brings an added complication. When I’m going to do a debate or speaking at a conference, I have to make sure that I’ve tested and know where I am, so I can adjust as necessary.”

Keeping on top of her condition has even led to her surreptitiously breaking the House of Commons' strict rules on not eating in the Chamber.

“There was one occasion when I had been expecting to go into the Chamber later, but the way the debates were drawn up meant I had to go in at 11am and I knew I wasn’t coming out till about five,” she recalls. “I had a bag of nuts in my handbag and one of my colleagues would lean forward every now and then, so that I could eat some nuts without being seen by the Speaker.”

Yet, even though she is doing one of the highest-profile jobs in Government and working irregular hours, Ms May does not see her challenge in managing her condition as being greatly different to that of anyone else with Type 1.

“In basic management terms, it’s the same for everybody,” she says. “You have to get into a routine where you are regularly doing the testing.”

Part of her approach to diabetes is being upfront about it. “I don’t inject insulin at the table, but I’m quite open about it. For example, I was at a dinner last night and needed to inject and so I just said to people: ‘You do start eating, I’ve got to go and do my insulin’. It’s better to be open like that.”

In part, her attitude to diabetes has been inspired by another prominent person with the condition,Sir Steve Redgrave. When she was first diagnosed, she was “very struck by” a quote on the Olympian’s website, in which he said that diabetes had to learn to live with him, rather than him living with diabetes. “I think that’s a very good way of looking at it,” she says.

Ms May has now joined Redgrave as one of the highest-profile people with diabetes in the UK and, in her case, this happened literally overnight after she did an interview with The Mail on Sunday. It was a huge news story that was followed up by all the national newspapers and broadcasters. Even now, if you type ‘Theresa May’ into Google, ‘diabetes’ is one of the options that is suggested by its predictive text.

For someone who had always kept her private life separate from her career, having such an intense focus on such personal information wasn’t something she relished. “I suppose it wasn’t that easy because I’m not somebody throughout my political career who’s talked much about their personal life,”she says. “I’ve always tended to rely on it being about the policies and politics and so forth, and so it was quite a decision to come out and say it in that way.

“But, the reaction overall has been pretty positive. I’ve been interested in the number of people, particularly in the six months after it became public, who came up to me at events and talked about being diabetic and I still will get people who come up and talk to me about it.

“Somebody did say to me that they were very surprised I’ve got diabetes because I don’t lead a ‘dissolute lifestyle’. And, of course, I said: ‘I’ve got Type 1 – it’s an autoimmune condition’. But, the reaction from people with diabetes is that it’s good that somebody’s come out and said they have diabetes.”

Since her condition has been made public, Ms May has been interviewed about it on BBC Radio 5 live and has lent her support to charity work. For example, she has recently written to schools in her Maidenhead constituency about Diabetes UK’scampaignto make sure schools understand the support they are legally required to give children with Type 1 diabetes.

Above all, she hopes that by doing the demanding role of Home Secretary, she can play a part in dispelling the myth that having diabetes has to hold people back. 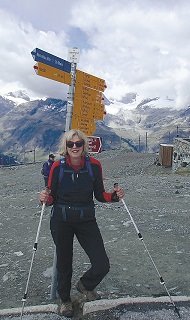 “I would like the message to get across that it doesn’t change what you can do,” she explains. “The more people can see that people with diabetes can lead a normal life doing the sort of things that other people do, the easier it is for those who are diagnosed with it to deal with it.

“The fact is that you can still do whatever you want to do, for example, on holiday my husband and I do a lot of quite strenuous walking up mountains in Switzerland, and it doesn’t stop me doing it. I can still do things like that and can still do the job.

“But, people who don’t understand it assume that the fact you have a condition means there must be something you can’t do; that it must change how you live your life in some way.

"And, of course, it does change your life in that you have to make sure you've got the right diet and that you’re managing your blood sugar levels, but, beyond making sure you’ve got that routine, you just get on with other things exactly the same.”

This article appears in the current issue ofBalance magazine.