Get Active and say #iCan

Gavin Griffiths was diagnosed with Type 1 diabetes at the age of 8, which brought many uncertainties to his life. He had to adjust his lifestyle in a number of ways in order to adapt to his diabetes. 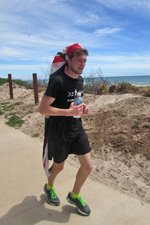 At the age of 17, Gavin decided to take on his first challenge. He was going to run the 29 mile coastline of Thanet, Kent. Gavin was told by other people that this challenge would be impossible because he was too young and because he was a diabetic. Determined to show people that his diabetes would not stop him, he completed the 29 mile race in 3 hours and 1 minute.

Since then he has done many challenges, including running 30-mile ultra marathons every day for 30 days. Gavin has challenged himself to run "Around the world in 80 'Blue Circle' Marathons'. He will run in 80 places around the world across the seven global regions of the International Diabetes Federation and share the true diabetes stories from people all over the world.

Gavin was given the honour of being a London 2012 Olympic Torch Bearer as he reflected the values of keeping positive about your diabetes. He eventually became known as 'the Diathlete' to motivate people. He is passionate about showing others what they are capable of whilst living with diabetes.

"Go out and have a go. It doesn't matter exactly what you attempt, just go out and make something happen. You don't have to run super distances like a crazed mad person, you could do something in a community, you could get people teaming up together, having fun - I always say life is for living and I believe that with diabetes it is more of an excuse to go out there and live it to the fullest. If you do wish to test yourself with big endurance feats as I do, I applaud you - feel free to get in touch with me for advice ongavinc.griffiths@yahoo.co.uk."

So come on – what are you waiting for? Set yourself a personal challenge - whether it’s 5k or a marathon - and show the world that nothing is impossible with diabetes. Find out more about ourfundraising events,or emailevents.fundraising@diabetes.org.ukto for further information.

For more information on Gavin and his story check out his website:www.diathlete.org.