May Millward has been awarded an MBE in the New Years Honours, partly for services to the community in her role as chair of the Diabetes UK West Lothian group. She shares with us her story below. 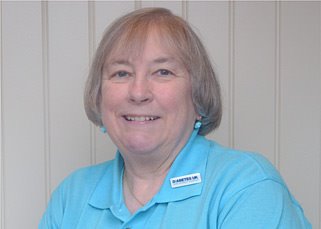 When sorting through the post on return from a couple of weeks' holiday in Italy in November, I was surprised and delighted to find a letter from the Cabinet Office informing me that I was to be put forward for an MBE in the New Year Honours. The MBE was partly for work relating to mediation and partly for volunteer work with Diabetes UK. I retired from the Department of Work and Pensions in June 2013, but over the last few years had developed and managed a mediation service to resolve disputes between colleagues.

Some seven years ago I was diagnosed with Type 2 diabetes. After a couple of years I decided to go along to the Diabetes UK Livingston and District voluntary group. At the time the group had been running for a couple of years but was beginning to struggle with attendance at meetings in single figures. I found it useful to tap into the experts who attended and started to attend committee meetings as I was keen for the group to take up the offer of a private swimming session in the school where the meetings were held.

In 2009 the chair decided to step down: I was asked if I would become chair and took on the role. Since then we have built up an active committee and now have a very healthy group which has been commended by healthcare professionals and has won a number of Diabetes UK awards. One of the first things we did was to change the name to West Lothian voluntary group to more accurately reflect both our membership and target audience.

At first our aim was to provide support by building up the membership, which then stood at 35. As 2009 was Diabetes UK 75anniversary we set ourselves the target of achieving 75 members, which we reached (we now have over 120 members). We achieved this by concentrating on promoting the group by whatever means we could think of and by providing a Diabetes Information and Advice Table (DIAT) at the local hospital diabetes clinics and other venues. We have since extended DIAT and now regularly attend several GP surgeries in addition to a variety of other venues.

My husband, Ian, had experience of raising funds for another charity and he successfully applied for funding from various sources, including the National Lottery, which not only gave us our own equipment for meetings and DIAT but also enabled us to buy printed leaflets and posters and other marketing aids. Ian continues to raise funds in this way which covers a lot of our running costs, and especially the cost of producing our monthly newsletter. This means that we can use donations raised by members for other initiatives such as sponsoring local families on Diabetes UK Care events. I write the monthly newsletter and have developed it to include information about group activities and interesting news about diabetes in general and healthy recipes etc.

This all supports our second aim, which is to raise awareness of diabetes throughout West Lothian. Last year we set up a fund-raising committee who made a very good start in our third aim of raising funds for Diabetes UK through a coffee morning and Christmas Fayre, although this year we have concentrated on supporting Tesco, where we were responsible for five stores. We have also provided DIATs and support not only during the Big Collection but also for local store initiatives.

We try to support people in managing their diabetes in as many ways as possible, from providing literature at meetings and surveying our members every year to providing a programme of guest speakers at our monthly meetings, which reflect their interests and needs. Our success in this is reflected in the very positive feedback cards that we receive after every meeting. In particular we have an annual Diabetes Question Time chaired by the lead diabetes consultant that we publicise widely. We also have a walking group and have had private swimming sessions and weight loss sessions. We are currently seeking funding for private group exercise sessions led by a personal trainer qualified in exercise for diabetes and weight loss.

I am delighted that my work as Chair of the Diabetes UK West Lothian voluntary group has been recognised by the MBE. It has been very hard work but very rewarding. However, while I believe that I have contributed to the success of the group, it is only possible with the help of the committee members and other volunteers. In particular our secretary Marylin who, amongst many other things, takes a lead on the DIAT tables and fundraising, and Ian, who not only does the onerous work of applying for grants, but acts as our IT expert and has developed our membership database and produces and distributes the newsletter.