Two years ago, at the International Diabetes Federation’s World Congress, the Young Leaders in Diabetes Programme was launched. This programme hoped to find the future leaders in diabetes advocacy from around the world, with 68 young leaders from across 48 different countries attending. 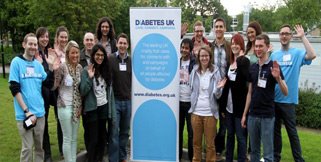 The representative sent for the UK was previous Diabetes UK London Volunteer Development Officer, Alex Silverstein. Whilst attending, Alex was not only elected as the first ever President of this programme, but was also tasked with delivering a two year project to support people with diabetes in partnership with Diabetes UK. This project was the Young Leaders Action Group.

This advisory group was made up of young adults aged 16–30 from across the UK, who Alex recruited to tell us about the unmet needs of young adults with diabetes, in addition to suggesting some pilot service ideas Diabetes UK could take forward to tackle those unmet needs.

Originally, Alex decided that it should be co-created from the beginning, with input from all of the young people, and so over 2012 brought together 20 young adults to design how this advisory group should support the project, in addition to highlighting three pilot service ideas.

They chose the name Young Leaders Action Group (YLAG) and highlighted the following as the main challenges affecting young adults:

The group then suggested three pilot services that Alex wrote into a fundraising bid. These included:

Alex then wrote a fundraising bid and gained funding for the delivery of the first two service ideas and enough money to scope the peer education course. The additional funding allowed the YLAG group to also expand to close to 40 members from across the UK and help Diabetes UK to develop these projects by March 2014.

The factsheets are now online, and the development of the web resource is still in production. The scoping of the peer education course has gone to the Diabetes UK Board of Trustees for their first meeting in 2014 for further consideration.

In addition to actively engaging with the pilot services, the members of YLAG have been enthusiastically involved in a number of Diabetes UK activities including the following:

Outside of Diabetes UK, some of the members have been involved in the IDF European leadership Camp (the first time UK delegates have been sent), and three more Young Leaders were sent to attend the second IDF World Congress in Melbourne.

One of those members who took part in the IDF Young Leaders programme was Elizabeth Rowley, who works in the volunteering team at Diabetes UK. Below she shares an excerpt from a blog post she wrote about her experiences.You can read the full blog post here.

"I spent nearly two weeks with about 140 Young Leaders from over 70 countries, learning how to advocate and – most importantly – learning about each other. The chance to build such meaningful relationships in such a short amount of time was truly priceless. I connected in person with people I had been communicating with for months, I spread the word and garnered support forthe 100 Campaignthrough collecting a series of videos, and I heard heartbreaking and inspiring stories from some of the strongest people I will ever meet. Being a part of the Young Leaders was incredible for so many reasons because it relates directly to my passions and priorities. 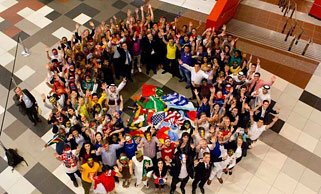 "After getting to know the Young Leaders, I feel confident that the slogan I created, which represents the Young Leaders Programme, "Young Minds, Fresh Ideas, Real Change" will be embodied over the next two years (and beyond) because my amazing fellow Young Leaders will use their understanding of the local problems to make REAL global change through their individual in-country projects.

"I will be working on my own projects: doing more with myT1International.com blog, taking part in theAYUDA volunteer programme in the Dominican Republicin June, and working closely withthe 100 Campaignto increase numbers and find ways to get more insulin access to more people. Insulin is just one piece of the puzzle, but it’s a start. I want to help and support the Young Leaders with the other pieces of that tricky puzzle as much as I can.

"One way I can do that is by featuring my new friends from Brazil, India, Canada, Kuwait, Sweden, Togo and many other countries on my blog in the coming months – allowing them to share their stories and the stories of others living with diabetes in their countries!

"At the end of the Young Leaders training we were asked to write one or more words that described our feelings leaving the training and congress. My word was, without a doubt, determined. Many of the Young Leaders have already faced many roadblocks to solving the global problems which should be priority for all people living with diabetes. My time in Melbourne gave me the hope and determination to keep going, no matter how difficult the path may be."