In the North West we have over 800 volunteers doing incredible things to support Diabetes UK. As well as raising awareness about the condition, our volunteers fundraise, represent us at health events, give talks to a range of audiences, support local groups and raise their voice about diabetes care across the region.

We like to shout about what our volunteers are up to, so keep an eye out for regular updates on their activities and successes. 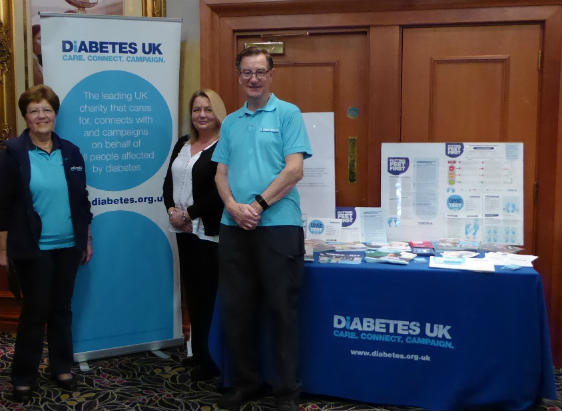 North West Influencing Manager, Yvonne with volunteers Barbara and Chris attended an event on the 28 February 2017 run by the Royal College of GPs (RCGP) featuring diabetes education for Healthcare Professionals. There were over 35 delegates from across the North West

including GPs, GP Trainees.  This was the first diabetes course of its kind run by RCGP in the region.

We ran a Diabetes UK information stall, where we showcased our literature plus the support available through the Helpline and the website.

The course was organised by Dr Vinesh Sobha, a GP from Thornton, near Blackpool, a diabetes specialist, who is also a diabetes clinical lead on Fylde & Wyre Clinical Commisioning Group and a Diabetes UK Clinical Champion.

We had the chance to engage with many of the delegates and ended the day with a stand empty of literature. 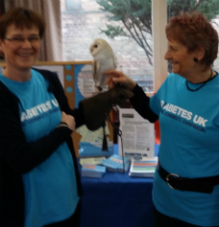 Diabetes UK volunteers Cherry Bowmaker and Emma Blake had a surprise visitor to their Diabetes UK stand: Mango, the handsome barn owl looked very interested in what they had to say. Cherry and Emma were representing Diabetes UK at the February 2017 Health Awareness Day organised by Phil Taylor and Jeremy Wolfson, members of St David’s church and community centre in Childwall, Merseyside.

The event was well attended by members of the local community, and the Diabetes UK stand attracted much attention. Cherry, as chairperson of the very active St Helens & District Diabetes UK Group, promoted their busy programme for 2017. Both Emma and Cherry raised awareness about diabetes and the support Diabetes UK has to offer. They also took part in a chair-based exercise routine to support Diabetes UK’s commitment to getting active. The owls were there as part of Hack Back CIC who use owls for various therapies. It was a really enjoyable morning. Thanks for having us, St David’s.

Ken was on air to talk about his 31 years of living with Type 1 diabetes.

Ken told listeners that his experience of living with diabetes was that, with a bit of effort and care, his condition had not prevented him from travelling the world, or stopped him taking part in activities such as scuba diving or walking in the foothills of the Himalayas.

Ken injects himself four times a day and during the interview the show's production team estimated that Ken had injected himself 45,300 times.

Tommy really got into the swing of being interviewed and here he is talking on Liverpool’s Radio City, telling listeners about the importance of getting risk assessed and how he has turned his life around through diet and exercise since his own diagnosis with Type 2 diabetes.