Following our 4Ts campaign which alerts parents and carers to the four main symptoms of diabetes, we are working with the Scottish Government and NHS Scotland on a new campaign Think.Test.Telephone.

Targeted at healthcare professionals, the campaign aims to emphasise the risk of Diabetic Ketoacidosis (DKA) if a diabetes diagnosis is missed or delayed in children. 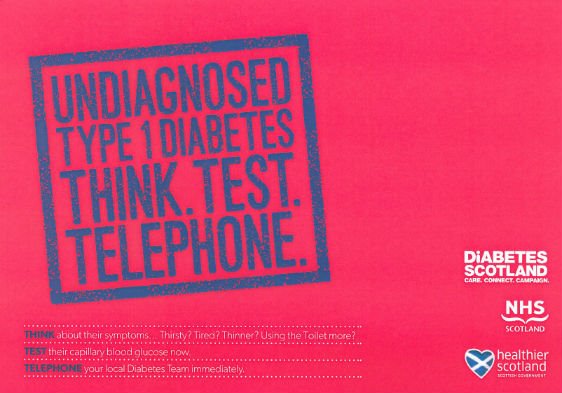 Scotland has the fifth highest rate of Type 1 diabetes in the world and there are around 300 children under 16 diagnosed annually. More than one in four of these children are not diagnosed until they are in DKA, and this rises to one in three for children under five.

Posters and leaflets are being distributed to GP practices all over Scotland. They urge healthcare professionals to test for Type 1 diabetes immediately if they recognise any of the symptoms.