When Diana, 13, went away with the Girl Guides to Disneyland Paris, she anticipated new experiences, but not ending up in a French hospital with diabetic ketoacidosis (DKA). Diana tells us how she got through it. 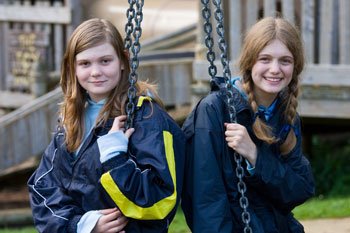 "I was diagnosed with diabetes just before my seventh birthday and had always taken it very much in my stride. I'm on insulin pump therapy and my readings have generally been very good. I've never let my diabetes stop me from doing anything; I control it, not the other way around. This trip to Disneyland Paris with the Girl Guides was no exception. Having to cope with my diabetes without my parents and being totally responsible for my control didn't faze me at all; in fact, I was looking forward to the independence.

This was going to be a new experience; it was my first time abroad without my family (although my younger sister was also on the holiday) and, despite being only 13, I felt confident about looking after myself.

The coach journey to France through the Channel Tunnel went smoothly, and we arrived at the Disney hotel without any hiccups. Soon we were sorted into rooms of three; I was sharing with my sister and another friend. After a quick exploration of the hotel and bite to eat, we all settled down for a night's rest in anticipation of spending the next day in the park.

The first day of independence could not have gone any better. As half of my group of six had never been to Disney before (and being the oldest in my party), I decided it was my responsibility to give them the full Magic Kingdom experience. We jumped between the shortest queues, watched the parade, met the characters and ate popcorn and lollipops. That night we all slept on a high, with a smile on our faces.

I didn't feel 100 per cent the next morning and couldn't eat much at breakfast. Determined to have another great day, we ventured into the Walt Disney Studios, and I even managed a ride on the Rock 'n' Rollercoaster before I vomited. Feeling immediately better, I went to one of the shows, only to be sick again. I was taken back to my room by one of my leaders and went back to bed, while continuing to be ill into a bowl. I couldn't keep anything down, even water made a short reappearance. My blood sugar was more than 30mmol/l, but no amount of insulin seemed to change that. I later discovered that this was due to a hole in the tubing connecting my cannula to my pump (it could have been easily corrected had I been rational), and this led to diabetic ketoacidosis. Unsure what else to do, the leaders decided to call out a local doctor to check me over - this somehow resulted in a fireman, a doctor and two paramedics turning up, who packed me off to the nearby hospital in a taxi.

Much of what happened after this point is hazy, as I was in a state of semi-consciousness and little aware of my surroundings. I know that I was taken to a small side room, where I was changed into a plain hospital nightgown and had a cannula inserted into my hand. I also had a number of sticky pads added to my back and chest to monitor my heart. When asked to go to the toilet, I was told I couldn't move from the wall and was given a bedpan. Finally, a drip was inserted into my arm and I was given a large amount of insulin and something to stop me vomiting. Exhausted and shaking, I eventually got a few hours' rest before being moved to a children's ward.

The problem wasn't solved that simply. The rest of the Guides had finished their three nights away and were ready to leave, but the hospital wasn't releasing me for at least one more night. A decision was made that the other Guides would return home and two of the leaders, Pat and Sarah, would stay with me in France. The next day was pretty difficult for us all - especially as I found that my French speaking skills didn't stretch to being able to explain my condition or my treatment. The problem was also complicated by the French hospital not understanding pump therapy and believing that my insulin pump had failed completely and was utterly useless. Yet I did manage my first proper meal in two days that evening - my throat was like cardboard and the food was so painful that I nearly gave up and went hungry. Throughout the day I had been visited by a number of people who spoke varying levels of English and treated me as though I was 3 years old - I was even asked by the children's play specialist if I would like some colouring books to keep myself occupied. I politely declined!

That night was another rough experience. Doctors came and went throughout the night, checking my blood sugar, which had finally fallen to within range, and also checking my pulse and taking blood samples. I shocked myself when a trip to the bathroom gave me the opportunity to see myself in the mirror. I looked pale and weak, leaning on my drip post for support. As I had been forbidden to use my mobile phone by the hospital, I took the chance to text my parents, and I cried when I received a reply saying, 'Hang in there, you'll be home soon. Love you. xxx'.

The hospital was determined to keep me in for another few nights, but my leaders and I had other ideas. After a lot of admittedly stunted conversation, we persuaded the doctors that I would see a healthcare professional the second I was back in England, and that I was well enough to be released. Pat and Sarah were incredible - they took me back to the Disney resort, where a room had been kept for us for the day and I had a shower. We then went to find some food in the Disney Village and had a look around the shops. I didn't have much strength, but being away from the hospital gave me a new lease of life. At 7pm we boarded a Eurostar train, which had been arranged in England by my mum, and headed back home. The journey seemed to take forever; all I wanted was to be away from France and to see my family again.

The reunion was emotional, and on catching sight of my parents, I burst into tears. This was met by an equal amount of sobbing from my mum and shortly both of my guide leaders joined in. I was so happy and relieved. The whole ordeal had been stressful and painful, and I was just glad that my leaders had been so supportive and caring throughout it or I may not have made it through.

The experience had given my confidence a huge knock. I was sure that the whole event had been entirely down to my own incompetence, and I never wanted to go away from my parents again.

I believe life experiences such as this are there to learn from, and I regained my confidence within a few weeks, having realised that, although the situation could have been better handled, it was not entirely my fault. Since then, I have been abroad several times with the school, and I have also attended a 1940s-style Guide camp in Norfolk for the past three years, all of which have been successful.

I'm not daunted by dealing with my own diabetes; I have just come to realise how important it is that the people around me understand my condition and know what to do in an emergency. I'm so grateful to Pat and Sarah for getting me out of the hospital and back home in one piece, and to my doctors who kept in touch with the hospital in France to explain my condition. The holiday proved to hold new experiences that I didn't expect and for that matter am in no rush to experience again."