Chris was diagnosed with Type 1 aged 22. Having struggled to come to terms with his diagnosis, he has since completed five marathons, 14 half marathons and more 10k and 5k runs than he can remember. 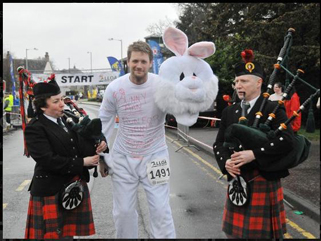 When I got diagnosed at 22, at the wild stage of my life, I was going out partying every weekend, and then the bubble burst.Being sat in the doctor’s chair, with him handing me a pamphlet informing me that I needed to go to the diabetes ward because I was a Type 1 diabetic was a massive shock to the system.

The staff at Hairmyres Hospital in East Kilbride were great with me and still are. After the first two weeks it was difficult, swapping certain foods for other things, then completely eliminating sweets from my life and not being able to enjoy myself without peering eyes looking on along with the constant questions of “Are you alright? What's your blood sugar? Do you need to go home? You’re diabetic, you can’t do sports. You can’t join the Navy, son, you’re diabetic!” That was the biggest kick, being unable to join the Navy.

The constant questions were driving me crazy, and so after the second week I just crumbled into a state, wailing that I couldn't do it. I kept testing myself for a few months, with my blood sugar readings always in the 20's - the more I looked into the testing, the more upset with myself I got, so eventually I just stopped testing. It was a very stupid thing to do. I stopped testing for five years, hence why I am suffering for it today with early stages of neuropathy.

I’m now testing 14 times a day and my ketones are down to 0.1. I was never active as a child or into much of my teenage years. It wasn't till my first 10k back in 2010 that I realised I quite liked running, and I really liked the medals! I booked maybe two or three (runs) in a year, then slowly a few more from 2011 to 2013.

By 2014 I had achieved 36 runs in the calendar year, and this year I am aiming for 100 events - so far so good, as I have lost count already on what I have done so far!” Chris’ hectic running schedule for forthcoming months includes the Newcastle Marathon, the Vale of Leven 10k, Giffnock 10k and the Liverpool Rock ‘n’ Roll Marathon, when he will be running in a bunny suit also he will be competing in his first competitive triathlon on 21 June.

“I’ve completely become obsessed with running - it helps so much with anxiety problems, health, fitness, socialising - anything you can think of, running helps! I also love to prove people wrong. If someone says to me, "Oh, it’s diabetes, you can’t do this or can’t do that,” my answer is: watch me! This is what I have done. Now tell me who can’t do this or that!

“My favourite race was Manchester Marathon in 2013. It was my first ever marathon where the streets where lined with 200,000 people. That was the most emotional day of my life as I set challenges on behalf of my gran, who was battling ovarian cancer. The challenges included shaving my hair off, walking 72 miles from Hamilton to Dumfries, climbing Ben Nevis, and running the Scottish Half Marathon.

I wore the bunny suit for all my runs, ending with the Manchester Marathon. “I raised over £1400 for two ovarian cancer charities called Let’s Shout for Linda and The Nicola Murray Foundation on behalf of my gran, Pat Little, who passed away in March 2014. I miss her every day, and she was my biggest inspiration.”

“I won’t lie, it’s been difficult at times living with diabetes and extremely hard to accept it and the emotions you go through are beyond frightening. But the older I got, the more I realised it was fate, what I needed to do was move forward and accept that I have diabetes but at the same time don't allow it to beat me, maintain a healthy diet, keep running and live my life.” Inspired by his love of running and maintaining a healthy lifestyle,

Chris has set up a running group in the Lanarkshire area called DB12Run, a free jogging, running and walking group for people with Type 1 and Type 2 diabetes and other medical conditions.

Chris stresses that the group, which meets at Strathclyde Country Park on a Wednesday night at 1930 hours and a Saturday morning at 0845 hours, is not about running times or pace, but for people who would like to be more active and to make new friends.