'I have always thought that I might be able to use my running to raise funds one day and that day has clearly come.'

"I am an experienced runner and have run a few marathons, but none since I became insulin dependent (summer 2007), a milestone which was fairly quickly followed by a knee arthroscopy the following spring.

I hadn't really been intending to run another marathon for a while (if at all) and so, initially, my participation in the 2011 Virgin London Marathon came about almost by accident.  I was on holiday - with no internet access - when the ballot for places opened but a friend said that, given that he was getting up early to put his own entry in, he would do likewise for me. 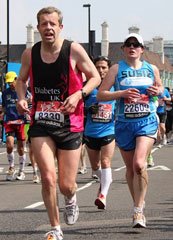 I was quite ambivalent at that point but the marathon was 11 months away and the odds were against getting in anyway...? You could almost predict what happened next of course - come the beginning of October, I was 'in' and my friend had got the usual rejection magazine.

It so happens that, only four days later, I was told that the place where I was working was going to have to cut its workforce and so, as a contractor, I would be finishing at the end of the month.  So, fairly suddenly, I was out of work at the end of October and - with the state of the jobs market - I soon realised that I was going to be grateful to have marathon training to focus on.  Even with two feet of snow on the ground a few weeks later I was able to get out and train in the daylight hours!

Whilst looking for work and training for a marathon both take up a fair-sized chunk of time I still had quite a bit of time to spare, particularly in the dark winter months when the garden and the countryside are rather less accessible than I like.  So I thought that if I was ever going to be able to take a good stab at fundraising it was while I had this extra time on my hands.

I have been a member of Diabetes UK since shortly after I was first diagnosed and I find the website in general and Balance magazine in particular to be great sources of information, relevant  stories and experiences.  I have always thought that I might be able to use my running  to raise funds one day and that day had clearly come. The number to contact is easy to find in the magazine and on the website, and soon I was speaking to Hannah Mullervy and the fundraising pack was arriving in the post.

I have to say that the overall experience of running for charity was a hugely positive one.  One of the challenges with being out of work is keeping a wide range of contacts, and the fundraising turned out to be a real help in this respect - I followed as much of the advice as I could, setting up a dedicated page on the Virgin Money Giving website (as they are the title sponsor for the London Marathon, charities get more per donation this way) and set forth with a blog to let those who wanted to know how the training was going and where donations could be made.

It is amazing how many people have similar experiences, know other diabetics or want to know more about the condition. The contrast between the media-generated image of diabetics and a twelve stone insulin-dependent marathon runner  generates some comment as well!

As well as the giving-something-back side of fundraising, it turned out to be important to me in a way I hadn't anticipated.  Six weeks before the marathon, I badly strained a hamstring during a half marathon (pre-London preparation) race.  In the normal run of things, this would have been enough to ruin my marathon plans - but I was raising money for Diabetes UK and lots of people knew about it!

I decided I would do whatever it took to be on the starting line - three weeks of intensive physiotherapy and more stretching and strengthening than I ever want to do again - it was up to between 4 and 5 hours a day at one point - and I was back to easy running, with instructions from the sports physiotherapist that I had to keep it easy-paced if I was going to stand a chance of finishing (forget target times), and even then it was a case of keeping everything (metaphorically) crossed.

As if that wasn't enough, just as I was starting to feel that the worst was over, twelve days before the marathon I managed to trip over a raised paving slab and clatter my knee in a pretty serious way.  It wasn't so much the superficial damage to the skin on my knee that worried me (although there was quite a lot of blood) as the way my knee suddenly swelled up like a balloon and the whole of my lower leg became one giant bruise.  The weekend before the marathon, it was all I could manage to walk slowly ten minutes 'around the block', but sheer bloody-mindedness had kicked in by this stage and I wasn't going to be letting anyone down now.

After all that, the marathon itself was almost a case of relaxing at enjoying it, for the first 2 1/2 hours at least.  The crowds are fantastic support the whole way around, and I had my club's support crew to look out for at 9 and 22 miles - with the big boost of Diabetes UK cheering points at 13 and 25 miles to look forward to when it got tough.

It all got a bit more difficult after 18 miles when the missed training over those last six weeks caught up with me and the injured hamstring started to complain vigorously.  It was a very warm day as well, and this all added up to the last five miles being very difficult.  At this point, I found yet another way in which running for Diabetes UK could work for me, as I started playing mental games with myself to keep me going.

As well as the usual counting down the miles, kilometres and landmarks, I found myself thinking of everything I gone through to get there and of what I was trying to achieve with the fundraising.  There can be a point when the pain is just so much that anything to distract you from the physical reality will do.

I did eventually manage to stagger across the finishing line.  The second half had seemed to take forever but the split times keep reminding me that it was only ten minutes slower than the first.  It took me ages to get moving again after crossing the finish line, but I eventually made it to the Diabetes UK cool-down party.  The food and massage were great - but it was sharing the experiences that really helped.  Volunteers, runners, families and masseurs were all great  - and we were all there with a common cause as well.

An experience never to be forgotten and one that I hope my body - and the luck of the draw in the ballot - will allow me to repeat one day.  I can (and do, regularly) heartily recommend London for Diabetes UK to anyone who can manage it."