Read Christine's daily account of her adventures in China and why it's an experience she'll never forget.

Leisurely morning of pampering before Barry took me to The White Horse near Heathrow for late lunch with Adam and Anna and goodbyes! Barry then took me into Terminal 3 where I met up with my fellow Charity Challenge trekkers. Checked in very quickly and through security where we all grouped together in the bar before boarding our Air China flight to Beijing. Very cramped and uncomfortable so got very little sleep.

We landed in Beijing early afternoon. Beijing airport is vast and we had a long trek through immigration and baggage reclaim but at last met up with our Charity Challenge leaders who organised us all onto the bus. It took about 1.5 hours to reach our lodge for the first night – the State Training Lodge in the Ming Tombs area.

The room was not as bad as I feared but very basic. My room mate for the week was Jo and we settled in, struggling to sort out the electricity and discovering that we had no hot water! We all gathered for our evening meal with some trepidation. Rice, cabbage and various dishes which could have been chicken. We went to bed early - very tired.

Today was our first introduction to the wall and oh what an introduction! This was supposed to ease us in, but it was hard! A lot of the wall is crumbling and quite treacherous. After a six hour trek we had lunch in a local house. More rice and cabbage! Next stop our lodge in Black Dragon Pools. Greeted with ‘Love me do’ - The Beatles! Dinner much better – more choice and plenty of it. Nightcap sat around outside fire.

Today we trekked a national park that runs beside the wall. We trekked up a canyon that used to be a huge waterfall but due to there being a drought in the area, the pools that formed from the waterfall are not that full. Legend has it that a black Dragon lived in the main pool.

The first part was quite steep but terrain was very preserved. Then we steered off the main part and it all got a lot more edgy after that! Great! The terrain was rough and quite slippery and I fell down a treacherous slope making a mess of my arm.

There were sheer drops and plenty of hanging onto trees to stop from becoming a human avalanche. We trekked on through woodland. Another demanding day but definitely rewarding. The food is not too bad. I think the lodges toned it down for us picky foreigners. Best not to ask what it is – ignorance is bliss! Very painful aching legs! 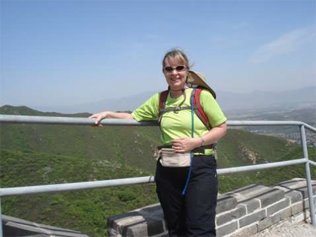 Christine climbed the Great Wall of China for Diabetes UK

Gubeikou was a place of incessant warfare between the Chinese and the Mongolians and highly guarded by various dynasties particularly the Ming dynasty.

We started with an hour’s steep climb up onto the wall. Some of the wall has fallen down and there are some sheer drops which were difficult for some of the group who suffer from vertigo.

We were accompanied by three or four locals known as the Hello people.

I trekked, trekked and trekked some more, had more aching muscles than I knew I owned.

The Hello people walk with you chatting to you, helping you along the wall, they are seriously fit! They make a living out of selling drinks and small souvenirs to the trekkers. They actually offer you a service though rather than just beg. One of the girls encouraged me, holding my hand to pull me along and telling me ‘come on’ – it was well worth the amount I paid her which included a souvenir.

We walked along the undulating top of the wall, through many watchtowers, sometimes climbing into them. It was so hot and humid. We descended off the wall walking through rural farmland and villages. It was a tough day and I was glad to finish.

Walked a steep climb opposite the lodge straight onto the wall.

The Jinshanling section of the wall has been renovated in most parts and therefore there are more visitors here and lots more Hello people. They can get a bit annoying if you don’t need them but a wonderful help if like me you do need them! They all sell the same souvenirs but you have to barter the price down as they are obviously going to start high.

Today we ascended and descended many steps. A lot of the stairs are extremely steep and crumbling in parts, but the scenery is picture postcard stunning and we had a beautiful clear day.

We came off the side of the wall and walked down a steep dirt track onto flat land – flat land was such a joy to walk after a day like that. We had a 90 minute journey to our next accommodation and joy of joys it was a proper hotel with an enclosed shower cubicle, clean sheets and towels and robes! Luxury! Another Chinese dinner – more rice, cabbage and unknown meat dishes!

The last day of wall walking on the Mutianyu section. This is where they take the heads of state to visit – about 80km outside of Beijing. We were told this was the hardest ascent - just to get onto the wall was a lung bursting 1100 steps!Once there we walked along the wall to what is called the ‘heavenly stairway’ – more than 400 more steps! But hey – steps is what we do. The viewing platform at the top was our finish line and everyone was cheered with a round of applause when they got to the end destination. We had made it! I made it!!

After coming down all those steps again we went to a restaurant for lunch en route to Beijing and a stop at the Silk Factory. Then we found out what rush hour traffic is like in Beijing – horrendous! It took ages to get to the Holiday Inn – our last hotel. As a reward we were taken to the night food market. It’s a long street that sells every kind of animal cooked on a stick!

There are beetles, scorpions, centipedes, silk worms, sheep’s testicles among many others. There were some very brave people in our group who tried lots. I just took photos but did try the sugared fruit which was lovely.

We then had an incredible experience when we visited a Beijing massage house. I was in a room for three where three masseuses massaged us in unison for an hour and a half. They spent about half of that on our feet. Then legs, bum, back, shoulders and neck. Some of it was a bit painful but needed.

A whole day to explore Beijing – not long when you consider Beijing has an official population of 20 million (unofficial 30 million) and is the size of Belgium! So we stick to the obvious. First stop is the Temple of Heaven. This is where the people conducted ceremonies to the God of Heaven to ensure a good harvest! It is a beautiful blue temple.

Around the temple is a lovely park, where the people practice Tai Chi or other sports – some dancing with swords. Also people come here to socialise - they sit under verandas playing cards dominoes or Chinese board games. The place is alive and buzzing early in the morning – just good to walk round and soak up the atmosphere.

Next onto a Chinese tea ceremony, tasting some gorgeous tea such as ginseng oolong, lychee tea and a tea called pu’re tea which is aged like whiskey. The one we tried today was 12 years old – good for the kidneys allegedly.

Pressing onwards, the bus dropped us at the famous Beijing landmark of Tiananmen Square, with its famous building depicting a picture of Chairman Mao. The square can hold one million people. There were many people here today, mostly Chinese but a few westerners. A lot of Chinese people have never seen a real, live, white European before and you get a lot of people just staring or asking to have their picture taken with you. They call us the ‘big nose’ people!

Tiananmen Square is big, but even with the amount of people here, there is still room and you feel very safe. The crime rate is low in China – they still have the death penalty for crimes deemed to be serious enough. If a person gets sentenced to death, the family has to pay for the bullet to shoot them – hmmm.

So quick lunch again on the edge of the Forbidden Palace (Chinese again obviously). The Forbidden Palace is stunning – you can easily get transported back to Imperial times. It is also vast, building after courtyard after building after courtyard….. which ends with the Imperial Garden which would be a great place to visit after dark.On our last evening we had a farewell dinner in a local restaurant, where we were served up Peking roasted duck. Then we were presented with medals by our fellow trekkers. Some of use got quite emotional, given the stories behind the charities and the achievements some people had made. We had a sing song on the bus back to the hotel - most of which was conducted by one of our local guides Donald - who did a great Johnny Cash, but also some favourites from Elvis, the Beatles and oddly Old MacDonald's Farm - very funny  in a Chinese accent.

Up early again to pack before being transferred to the airport. Had time to shop in duty free before boarding our Air China flight back to Heathrow. Had a bit more legroom this time and watched three films as well as consuming two meals! Landed on time and had no problems with immigration and picking up my bag. It was lovely to walk out of Arrivals to be greeted by Barry, Adam and Anna. Welcome home!

I trekked, trekked and trekked some more, had more aching muscles than I knew I owned and achieved so much more than I ever believed I could. I raised more than £2,200 for Diabetes UK and had an incredible experience which will live with me for ever. Thank you so much to everyone that supported me and believed that I could do it!