Just how far would you go to raise funds for Diabetes UK?

Adam from Edinburgh took on the Rat Race – a 20 mile run featuring 200 obstacles. 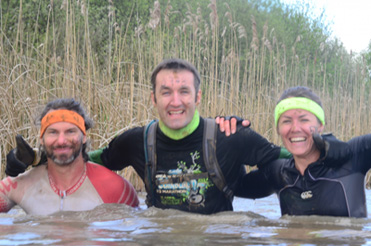 Adam with sister Kate and her partner Paul during the Rat Race.

I was diagnosed with Type 1 in 2009, when I was 29. My symptoms were much the same as everyone else; tired, losing weight and thirsty, but I only noticed when I visited my family for Christmas.

During the extra indulgence, my symptoms got worse and everyone started to comment on how unwell I looked. I promised to see the GP when I got home, in the New Year.

During our seven and a half hour drive home from Devon to Edinburgh, my girlfriend Daisy and I stopped at every service station to buy a drink and to pee. I could barely make it to the next service station as I was bursting for the toilet, and we both found this hilarious. We were totally unaware as to what was happening to me. I saw my GP a few days after and he checked my blood with a monitor. It could not read my level as it was too high. I ended up in hospital later that day and was diagnosed with Type 1 diabetes.

I had to take time off work for four weeks whilst trying to get to grips with insulin injections and measuring blood sugar levels, which he and his family found very stressful. There was so much information and I really didn’t know what I needed to focus on; I felt totally overwhelmed by it all.

The nurses at the General Western Hospital in Edinburgh were fantastic and I saw them every day for two weeks until I was happy to go solo. During this time, I ordered the “newly diagnosed” support pack from Diabetes UK and signed up for Balance magazine.

I have always been active doing mountain biking, surfing and running and was very worried about how this was going to affect things. It was a bit of a struggle at first with plenty of trial and error, but I soon realised that as long as I considered and prepared for hypos during exercise or an event, I could continue as I was.  In 2011 I put it to the test and did the Edinburgh Marathon. I was testing my levels all the time and finished in a respectable time. After doing this I realised diabetes will not stop me from doing anything I want to do.I decided to raise funds for Diabetes UK after my sister bought me a ticket in the Rat Race Event as a Christmas present last year. The Rat Race is an endurance event and so I had to undertake serious training to prepare.A lot of obstacles are in or on the water, so I had to carry a waterproof back pack to carry my sugar and tester. My insulin pump is waterproof, but on the day I did insert a second cannula in case the tubing got caught and pulled the cannula out. I ended up using a camel back with a rollup sealed bag inside for my food and pump spares.

Along with hundreds of others, we set off in glorious sunshine. After a few miles the obstacles started and we got wet and muddy. The obstacles did not stop… crawling, climbing, jumping, swimming, pulling, sliding, swinging - on and on and on…

At 10 miles we hit a bunch of water obstacles that went on a bit too long. I got really cold and was shaking uncontrollably. After some food and warming up in the sun I started to feel a bit better, this was the second time I tried to test myself but my monitor did not survive the water obstacles. So I couldn’t get a reading, but I knew from training how much sugar I need to take and just had to make sure I didn’t go too long between eating.

The last few miles, we were all struggling and it really needed a team effort to get ourselves up and over the obstacles. And we did it! It took us six and a half hours, and we were all nursing sore knees and red raw hands from the monkey bars, but no long term damage.

Myself, my sister Kate and her partner Paul have raised an incredible £1,049.93 through their participation in the Rat Race.

I am amazed at how much research has gone into diabetes care. The glucose monitors are now so advanced they can wirelessly communicate to an insulin pump and suggest corrective doses if needed. This sort of technology allows discrete and precise sugar level control, every day, all the time. I have an insulin pump and it has taken all the stress away for daily injections. This sort of technology would not be possible without the dedicated research that Diabetes UK funds.