My hope for the future is that a cure be found

Ryan, one of Diabetes Scotland's highest raising supporters, is driven by seeing a number of family members affected by diabetes. 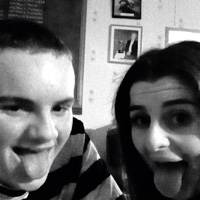 Ryan (pictured left), is one of Diabetes Scotland’s highest raising supporters of 2014

For many, teenage years are about finding out who you are, what you like to do, who your friends are and starting to make decisions about the future.

Ryan Mollison, aged 15, from Alyth in Perthshire, is already one step ahead – and showing initiative and enthusiasm that will potentially make him one of Diabetes Scotland’s highest raising supporters of 2014.

Ryan first starting fundraising for Diabetes Scotland in 2013, bringing in over £900 by holding a stall at a Christmas fayre and organising a Stovie Dance.

This year, he is attempting to raise a further £1,000 by holding stalls, selling Diabetes Scotland merchandise and organising a series of events, including a Walk for Diabetes in Alyth on 29 June. He also manned a stall at the Alyth Bakehouse during Diabetes Week (June 8 - 14th). His passion for raising funds and awareness for Diabetes Scotland is driven by seeing a number of family members affected by diabetes.

“Reading information about why money is vital to the charity was one aspect of why I started fundraising, and another was because numerous family members have been diagnosed, and some have also sadly passed away, one with Type 1 and the other Type 2 diabetes,” says Ryan.

“My Granny was diagnosed with Type 2 diabetes early last year, and this was the final push for me to get my head down to try and fundraise as much as I can.

“After I heard that my uncle had Type 1 diabetes, I was there to try and support him. He really appreciated the time and effort I put into fundraising. When he passed away, it was such a shock and then I realised I would need to support my granny. My granny is always thanking me for what I am doing, and I always said I hoped the money (I raised) would be useful. She carries on every day with the support of myself and everyone else around her.

“I find supporting other people heart-warming, as you get to know each individual story about what they have gone through.”

Ryan is keen to encourage as many people as possible to join him in raising funds for Diabetes Scotland.

“I would really encourage everyone to try and help raise money for Diabetes Scotland. The charity really appreciates the money that they are given, and if someone in your family is diagnosed with diabetes, I’d suggest helping them out by raising money to help with research for a cure, and everything else they do,” Fundraising is a great way to show support and show people what you can really do. It is also a great way to help out a charity in need.

“The best part about fundraising for Diabetes Scotland is meeting new people and telling them why I am doing this. They love to hear my story and they would love to hear yours too.

“My hope for the future that there can be a cure found for diabetes. I hope that it happens soon, and that everyone can get better and live life to the fullest. So please, help out where you can, to help with fundraising and volunteering. This will hopefully help find a cure and more treatments for each and every person living with diabetes.”

Ryan's Walk for Diabetes on June 29 raised a fantastic £655. To support any of his other fundraising across 2014, search for “Ryan’s Fundraising Year” on Facebook.