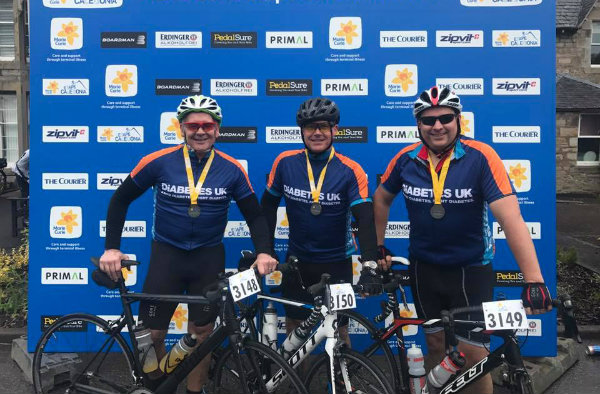 Steve, Paul and Kurt at the finish line of the Etape Caledonia

Team Intertia and the Etape Caledonia

This a tale of three men taking the plunge to challenge themselves together for fitness and some fun. The end result was not only a fantastic physical achievement but over £2,532 raised to support Type 1 diabetes research and help us towards a world where diabetes can do no harm.

Read below how Team Intertia (Steve Graham, Paul Weir and Kurt Hart) took on the Etape Caledonia, an 81 mile cycling sportive that starts and finishes in Pitlochry in the heart of Scotland (through the words of Kurt).

We’re three friends that started cycling to keep fit, typical MAMILs (middle aged men in lycra). Steve suggested we set a target to complete a sportive. After giving it some thought we all agreed to take part and chose the Etape Caledonia. I suggested that we should raise funds for Diabetes UK due to the connection to my family and the guys agreed. Both of my sons have Type 1 diabetes, so being able to fund research has been really important for us.

Over the last few months we’ve covered nearly 1,000 miles in training. Race day came with an alarm call at 4.15am followed by a drive from Crieff to Pitlochry, it was a cold start with the temperature showing 2.5 degrees at times on the drive. The weather was overcast but thankfully next to no wind.

The atmosphere was great as the competitors took on last minute carbs and prepared their bikes. We made our way to the start line and crossed the line at 6.50am. We got in to a great rhythm from the start and were soon making our way along the course to the first feed station at 20 miles, we continued past the station determined to go for as long as we could snacking on jelly babies and flapjacks to maintain our energy.

King of the mountain 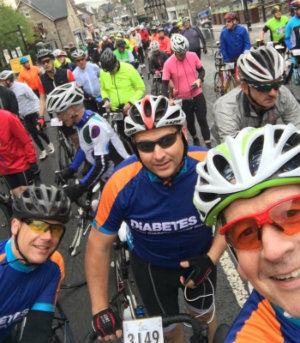 Team Intertia about to set off

Not long after the 20 mile mark we hit our first technical issue, Steve threw his chain closely followed by a puncture. A delay of 10 minutes and the opportunity for a quick chat and we were off again. Around the 47 mile mark we hit the king of the mountain stage, a climb over the shoulder of Schiehallion. Following the decent we were back on the undulating loch side roads.

On the homeward stretch Steve had another puncture at around 70 miles, by this time he was becoming more experienced at changing his inner tube and did it in no time. As the rain came down for the last 12 miles we continued determined to complete the course in under 5 hours. 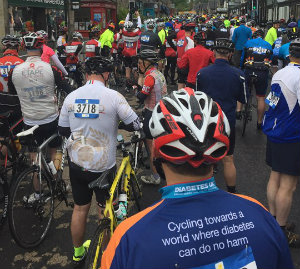 Cycling towards a world where diabetes can do no harm

We crossed the finish line in 4hrs 56mins, our tracked times were 4hr 33min which take out the time for punctures and a thrown chain.

I was delighted that  Paul and Steve agreed to fundraise for Diabetes UK and we really appreciate all the donations made by family, friends and colleagues. We also had some great comments and support during the race from fellow competitors which was fantastic."

Safe to say Team Intertia are no ordinary MAMILs, their incredible support will make a real difference to people affected by diabetes.

Thank you Kurt, Paul and Steve.