Raising twice as much as planned, Alex took on the challenging Paris-Roubaix bike ride!

Cycling a gruelling 170km, with falls, changing weather and the most difficult cobbles France had to offer, Alex was in for one hell of a ride! 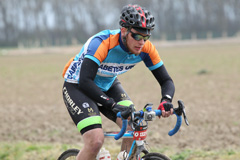 The morning I set off was wet and grey, but knowing I was going to be riding the very same cobbles as the greats, I pushed on. 13km into the ride the first section appeared over the brow; a 3 star 2.2km section made me realise I was definitely no longer on the cobbles of Lancashire anymore, these were proper cobbles!

At 69km in, the sun was coming out, but there was no time to enjoy it, as I looked down at my mile marker, I read "Trouée d'Arenberg" 2.4km long, rated 5 stars, and timed.

On Strava, pro rider Niki Terpstra completed this section in 3:40, so that was my goal, then about 10 minutes later I finally crawled across the line. The hardest 2.4km of my life! Having to pass two ambulances, and ride across slippy, rain and mud soaked cobbles was far from ideal. There was an option to take the footpath to the side, but that was for the boys, and today, I was trying very hard to be a man.

The hours passed, the kilometres carried on, and the cobbles never. ever. ended. at all. By the third feed station, our group had had maybe four mechanicals, one bottle cage lost, a puncture, a loose front wheel and a snapped hanger, meaning we had to improvise a single speed for the final 40km, but my trusty Team Diabetes UK cyclocross bike had no issues.

The only problem was me. No amount of training could have prepared my for these cobbles, and I was definitely starting to feel it, my hands were now very painful claws, my vision was just a blur as my eyes bounced around my head and then on final 5 star cobbled section, the Carrefour de l'Arbre it happened. 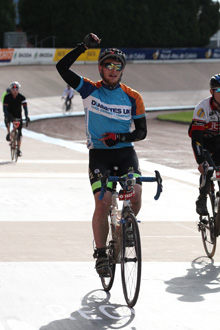 The chain bounced up and got stuck, meaning I couldn't pedal, meaning I was slowly coming to a stop on the cobbles, it was one of the embarrassing falls where I just couldn't un-clip in time and into the ditch I went, and that's when horrendous cramp in my leg kicked in and I went down, looking and sounding like I'd been shot.

A quick shake of the leg and check over of the bike and I carried on, knowing there was just 20km, and just two 'easy' cobbled sections to go, we pushed up a gear and went for it, we'd fought off rain, winds, a little bit of sleet, more rain, more wind, and a little bit of sun and all that was left was the Roubaix Velodrome; on the run in I caught a rider and decided I was going to take him, he went high on the banked corner, I followed, then used it drop down onto the straight and we were flat out and I took the lead, and crossed the line with my arms in the air.

A 170km ride, with 52.5km of the best, worst cobbles France could throw at us. I'd done it, and rolled around the rest of the velodrome and collapsed onto some fencing before collecting my finishers medal and going for a well needed shower in the same place as the greats do. Then a night with a quick meal and a lot of drinking we were ready to go out and see how the pros do it as we became spectators at the Forrest of Arenberg. Just walking down the cobbles I was amazed that'd I'd managed to stay upright! Then the pros came through at a million miles per hour, and I realised I have quite a way to go yet.

…But there's always next year!