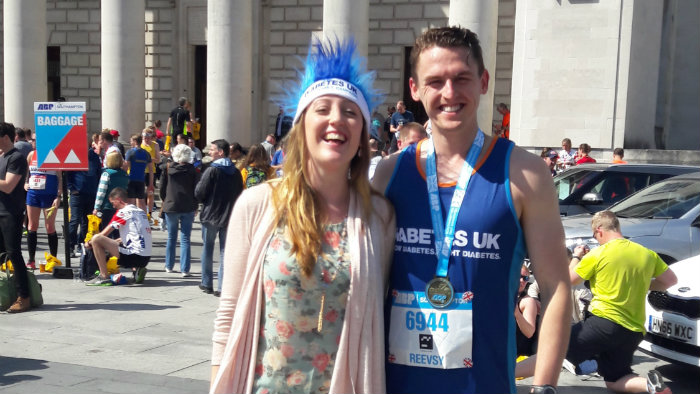 Ben and fiancee Colette at the Southampton half marathon

I decided to run two half marathons in 9 days

Ben's fiancee, Colette, has been living with Type 1 diabetes from the age of 16. Tragically in 2014 Colette's father, Brendan, who also had Type 1 diabetes, passed away from health complications caused by the condition.

With so much motivation to fight for a world where diabetes can do no harm, Ben decided to take on two prestigious races this year to raise awareness and funds for Diabetes UK, the Victoria Park Easter Run and the Southampton Half Marathon.

"I decided to run 2 half marathons in 9 days to raise money for Diabetes UK as it's a charity very close to my heart.

Brendan, Colette's father, was 55 years old when he passed away due to health complications from his diabetes.

Being in what I consider a privileged position, fit and healthy, I wanted to do what I can to raise money and awareness of the great work Diabetes UK do." 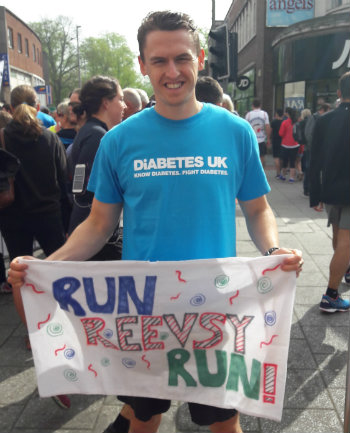 Ben with a home made banner

This wasn't the first time Ben's raised an inspirational amount by running for Diabetes UK. In 2015 he raised £1,019.22 from the Southampton Half.

This year however saw Ben achieve a personal best race time for that very race, whilst more than doubling his fundraising with a further £1,207.

Such an achievement wasn't possible for Ben without his colleagues at Totallymoney.com who donated £500 and have supported him throughout his fundraising, along the family and friends that so generously donated to hisJustGiving page.

Ben's fundraising will enable us to dramatically improve diabetes care, help everyone to manage their diabetes well and increase spending on diabetes research to one day create a world where diabetes can do no harm.