"This will be the biggest thing my body has had to endure in terms of stamina and strength."

Sophy Miles has a rare autonomic disease and reactive hypoglycaemia. After an incident in 2013, she went from being wheelchair bound to having to re-learn to walk and has now progressed with her strength and stamina to be able to participate in Swim22. Sophy doesn’t let anything stand in her way, read her inspiring story below. 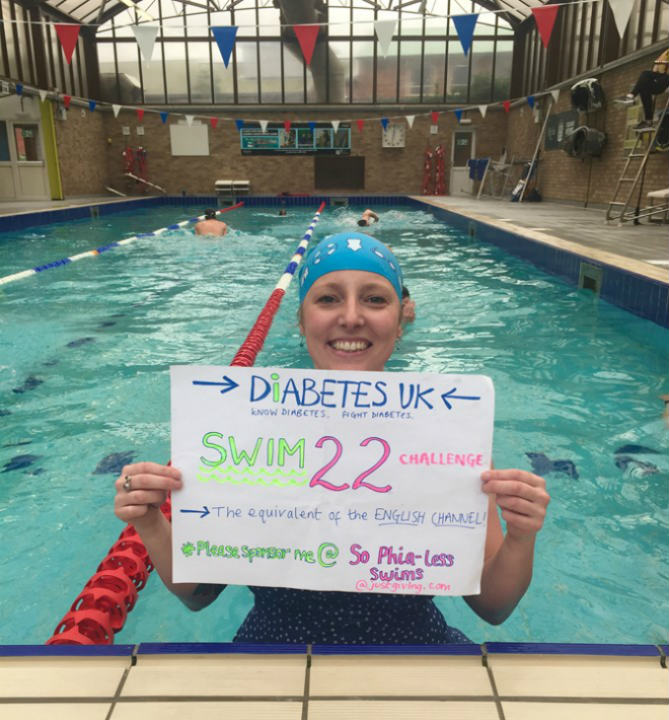 Sophy's first day in her pool at Exeter University.

Only one year ago Sophy could only swim 4 lengths of a pool with two swimming aid woggles and a person assisting her. But just 2 months ago Sophy refused the help she normally required and swam on her own. Sophy staggered a whole 10 lengths, building her way up to 20 and now to 30 lengths at one time. Sophy commented: “I do this once, sometimes twice a week. My partner did the maths last night and we have realised that I will have to swim 3 times a week, 50 to 60 lengths a go, to achieve this goal – yikes!”

“Firstly due to having a rare autonomic disorder, I have insulin resistance and reactive hypoglycaemia.  My sister also has Type 1 diabetes. Both of us have been significantly poorly because of this, at worst I was in a hypoglycaemic coma 2 years ago, and I now have significant nerve damage as a consequence of my illness. Diabetes UK are an amazing charity and organisation. The money raised will go into vital research to help people like me and I have to tell you that their social platform sites such as Facebook have been invaluable to me over the last few years - with help, tips, advice, and support readily available."

“Secondly, 4 years ago last month, I suffered serious ill health. My body started to shut down and I was in hospital for months. I had to learn to walk, talk and move. I was wheelchair bound but then progressed from a walking frame to crutches, in that time I was lucky enough to receive 16 weeks of hydrotherapy which was absolutely life changing! I had started in the pool at the hospital in February 2014 being hoisted in, having to have two therapists, ankle weights, two body support swim aids and a neck brace.”

I had lost all ability to swim or to even float.

“In May 2014 after 2 days of prolonged fits and seizures, my lungs collapsed and I was put into a coma and on life support. I remained in Intensive care for a week and a further month on a Neurological ward. I was back to the beginning and had to re-learn everything all over again. I would not go back to a pool until 18 months later, in January 2016 when I gingerly attempted those 4 small lengths, I came home and slept for 3 hours afterwards.”

Sophy is currently studying Sports and Exercise Science at Exeter University and her lecturers have been incredibly supportive of her fundraising. “They’ve personally sponsored me and offered to let me swim in the university pool for free whenever I want, plus they’re putting on an event to support my fundraising in May. I know that it may not be a big deal to some, especially surrounded by elite sports people - a challenge like this would be easy peasy (!), but this is a biggy for me (and many others taking part of course) so I’m so grateful for the support.

“There is so much I cannot do physically, I cannot walk far, I cannot run with others or complete obstacle courses for charity (they look SO fun!), but I CAN attempt to do this."

My body is a marvel, it is broken, but it is mighty.

“Why 'So Phia-less' you might ask? Well, my real name is Sophia and before I became ill I was training in a sport called Roller Derby- So Phia-less is my alter ego as that’s how I like to face life, and health and any obstacles that stand in my way!”

If Sophy has inspired you to take on this challenge and dive into 2017, sign up for Swim22 today.

You can register forSwim22 until the end of June.