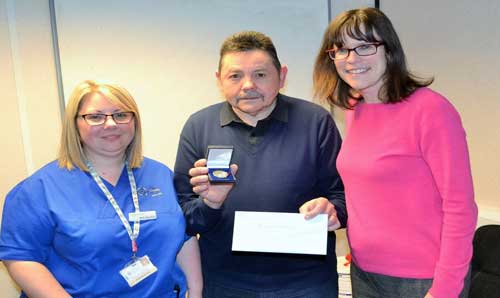 I was diagnosed with Type1 diabetes on 6 Feb 1967. I was 13 years old. I was taught how to inject myself by practising the technique on an orange.

I was drinking gallons of water or anything I could get my hands on and losing weight. My parents called our GP on a Friday because I was unwell. He came that day and examined me and told my parents to bring me to the surgery on Monday morning for a blood and urine test.

But on the Sunday, I was out of it and in a coma. My parents called 999 and I was taken to St Tydfil’s hospital Merthyr where I was diagnosed with T1 diabetes. I spent 14 weeks in hospital while they stabilised my blood sugar. I was put on one insulin injection a day and my diabetes team also talked to me about my diet and healthy eating.

In my first week back home I must have had about three or four hypos – one so bad my parents called 999. I was taken to Merthyr General hospital where I spent 12 weeks being stabilised again. This time I was put on two injection a day. The worst was dinners in school - there was no blood meters to check your blood sugar only urine test not like today. For the last 25 years I’ve been on four injections a day.

Over the years, I had some ups and downs with my diabetes and seeing different ways to cope with the condition and if it wasn’t for my wife Susan I might not be here now. She has helped me so much with my hypos and so have my children and friends. (Make sure you tell someone you have diabetes.)

The first syringe was glass. To sterilise it, you had to boil it before injecting. Then came the disposable syringe - they were much better. Next came the pen with smaller needles which was a godsend.

In November 2015, I went on theDAFNE course (Dose Adjustment for Normal Eating)for a week at Prince Charles Hospital. This changed my way of coping with diabetes, my blood sugar level has never been so good. My HbcA1c went from 8.6 to 5.6, 4.7, 4.7, 4.7.  I would encourage anyone to go on the DAFNE course if you have the chance. You won’t be disappointed.

At the end of January this year (2017) I started a new chapter in treating my diabetes with no more injections. I’ve just started on the Insulin Pump 640G. It’s still early days and I’ve still not mastered it yet but I’m getting there.

I would like to thank Dr Gautam Das Diabetic consultant for presenting me with the Alan Nabarro medal on behalf of Diabetes UK and Diabetes Specialist Nurse Beth Mumford, Diabetes Dietitan Vicky Oldham. And all the team at the diabetes centre Prince Charles Hospital Merthyr.