A small price to pay

Grant looks back on his diabetes healthcare over the years and is grateful to those doctors who spoke clearly and plainly. 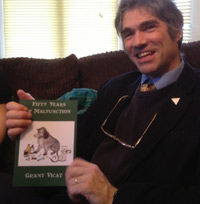 Having been diagnosed Type 1 at the age of 10 months in July 1959, my life with diabetes was something of a roller-coaster.

Until the age of 8, I existed on 1 injection of Lente Insulin per day and then suffered a 5 day coma. From then I had 2 injections a day of Rapitard and Monotard (Fast and slow respectively) and was put on the R D Lawrence Line Weight Diet, i.e. 240gms Carbohydrate a day, a regime I still follow.

By 1973 I was showing protein in urine samples, but since I was in denial, I failed to realise the significance. On beginning University at King's College London in 1978 I had primitive laser treatment in both eyes, more than once. It was an ophthalmologist (E W G Davies) who told me that if I carried on with my student lifestyle, I would be blind by the time I reached 23. I owe so much to King's and especially this plain speaking genius.

For over 20 years I was monitored by Mr Davies (who always had pockets bulging with Fox's Glacier mints) and Dr Peter Watkins, who kept a close eye on kidney function.

In 2005 I was singing in a choir at St Edmundsbury Cathedral, when the bride's mother Diana Chadney came up to me and said "Hello Grant, am I amazed to see you, and looking so well. We didn't think you would survive!" Diana was the Diabetic Ward Night Sister (Danielle) at King's College Hospital.

I left the Outpatients in 2000 and was referred by Dr Clark (West Suffolk) to Addenbrooke's Hospital, Cambridge. They reckoned dialysis would be necessary within 5 years, but 11 years later (still without tubes) Professor Watson and Dr Williams suggested a joint Kidney/Pancreas transplant.

After a far from "normal" life, I had no hesitation. I was put on the waiting list for donor organs in May 2012 and had six calls for the operation. In each case the pancreas was damaged. On the seventh, 12th August 2013, the phone rang 10 minutes after I had fallen asleep - ironically the only time I swore at it! They knocked me out at 16.00 on 13th August and finished at 02.00 on 14th August. I have not had an Insulin injection since and I missed the dialysis appointment by 8 days.

As a result of the complexity of the operation I have the dubious distinction of contracting Cystitis twice ("Welcome to our world" said my wife!), but cruelly discovered I had Charcot joints (in the ankles) in late October 2013. I was put in Aircast boots and later plaster for a total of 10 months. I now drive and play the organ, but have been advised never to run, jump or dance. A small price to pay.

'Fifty Years of Malfunction' is written by Grant Vicat.