Globe-trotting adventurer Roly Smith has never let his Type 1 diabetes get in the way of his travels. 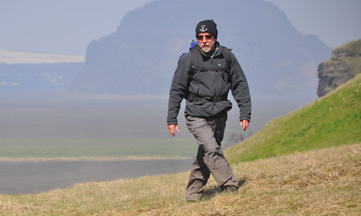 Roly Smith on one of his many walking trips

I can still vividly remember the depression I felt when I was diagnosed with Type 1 diabetes  12 years ago.

Then, in a more rational moment, I reflected on the life of Olympic champion rower Sir Steve Redgrave, an insulin-dependent diabetic, who went on to win five consecutive gold medals.

If it was good enough for Sir Steve, then it was good enough for me. I resolved that once my diabetes was under control, I was not going to let it stop me from doing anything – or from going anywhere. And so, even after the additional setback of a brush with prostate cancer, I haven’t. I still enjoy my passion of walking, particularly hill walking in the British hills, and as past-president of the Outdoor Writers’ and Photographers’ Guild, and a long-standing member of the British Guild of Travel Writers, I get many chances to visit some fairly remote and inaccessible places.

In recent years, I’ve been on several trips to the American West, including around 30 of their magnificent National Parks and wilderness areas, including Yellowstone, Yosemite and the Grand Canyon.

Most recently I visited the still-Wild West of Montana, South Dakota and Wyoming. I’ve seen the first rays of the sun to touch the shores of the USA from the granite summit of Cadillac Mountain in Acadia National Park in Maine, and watched the breathtaking majesty of the universe of stars on a midnight hike into the depths of the hoodoo-haunted Bryce Canyon National Park in Utah. 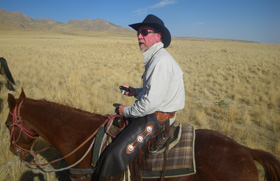 I have explored Canada from sea to shining sea, including the Pacific Coast of Canada, Vancouver Island and the Sunshine Coast, as well as Newfoundland, Nova Scotia and New Brunswick on the Atlantic coast.

And, we made several visits to the Canadian Rockies while our daughter Claire lived in Calgary, including an all-day ascent to the remote Burgess Shale quarry in Yoho National Park, where some of the earliest forms of life on Earth have been found, and hikes from Lake Louise and Emerald Lake.

Other trips have included Norway and an ascent of the vertiginous Preikestolen rock hanging over the Lyesfjord; to Bergen, Lyngen and Tromsø, and crossing the Arctic Circle for some glacier walking in Spitsbergen, a few hundred miles from the North Pole.

Walking trips have included the Julian Alps in Slovenia and the Arran Islands off the west coast of Ireland.Holidays with pals in the ‘Escape Committee’ of former colleagues from the Peak District National Park have ranged from the blistering heat of the Jordanian desert, including Petra, to chilly Iceland, to view the eruption of the unpronounceable Eyjafjallajokull volcano, which brought most of Europe’s air traffic to a halt in 2010.

Always remember, taking regular physical exercise is good for your condition – and for your soul. If you just take sensible precautions, you should be fine. My hope would be that my experiences will encourage other people with diabetes not to let their condition stop them from having similar adventures. So, what are you waiting for? Get out there and enjoy our wonderful world!