Roger, 74, was diagnosed with Type 1 diabetes in 1960. After 54 years injecting animal insulin, he was switched to human insulin which he didn’t get on with, leaving him no option but to take early retirement after 40 years as a priest. Now back on animal insulin, he is enjoying an active retirement. He says one of his challenges is trying to cope with his night time hypos, now he lives alone, following the death of his wife. 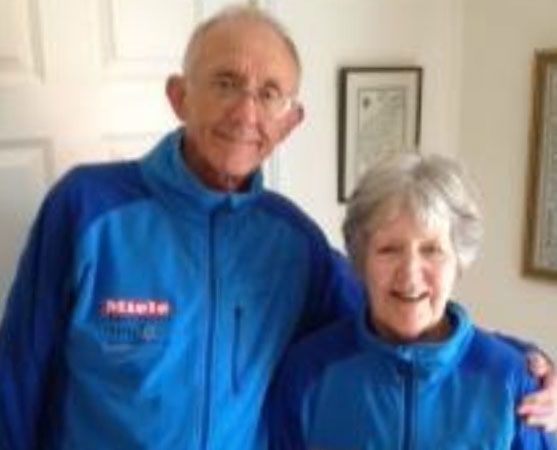 I was diagnosed as a Type 1 diabetic in 1960.  Apart from 12 months when I injected a long acting insulin (Lente) once a day I have been on two doses per day since then.

From the start and when urine samples were the only personal method for testing blood sugars I was told that my results would often vary because I had a low renal threshold. How that has turned out to be true!

As a student teacher for three years, when first diagnosed and living away from home, I weighed my food meticulously, but rarely saw a GP or any other medic (were there any diabetes departments in hospitals in the 60s?) unless in connection with some other complaint.

Following a job as a teacher, getting married to a wife, who took on the lifelong role as my carer, having two further years as a student, two children, five years back in teaching, a move to another part of the country and a fairly active life in a variety of ways including playing sport and in public life - and minimal contact with the NHS (apart from the 7 years when I was a member of a health authority!) - I was visited in my rectory by a pleasant but determined diabetes specialist nurse (around 1984....was this about when they began or had someone tipped her off from the health authority?!)

Since then I have had regular checks at the local centre for diabetes, which I had helped raise money for it to be built, and my journey with essential insulin has continued.

However when aged 60, after completing two years of my intended last seven years before retiring in my last parish (after 40 years as a priest), I was switched to 'human insulin' as the latest and 'everyone is having it now' treatment. This had the effect of triggering unexpected hypos in embarrassing situations as a result of which I was advised to apply for early retirement. This was quite soon granted, including a year's enhancement to get my full work pension and then, after 3 months rest, an active retirement began.

Except that 10 months later I read a newspaper article claiming that it is not unusual for long term diabetics, like me, to discover that humanoid insulin can cause hypo incidents to escalate. I immediately went to see the diabetes nurse and returned to the animal insulin that I have now been injecting for 54 years. I also started supporting a smaller charity, known as the Independent Diabetes Trust. It essentially challenges the withdrawal of animal insulins in many parts of the world and the way that some powerful drug companies do not have sufficient regard to the needs of older diabetics.

Returning to animal insulin did mean I could have an active retirement. At our daughter's suggestion we moved next door to her; this proved most sensible because of my wife's ill health from 2012 culminating in her death in May 2016 from Motor Neuron Disease.

The active retirement that my wife enjoyed involved, for both of us, looking after our grandchildren when their parents were at work, for my wife, remaining as a as an active fundraiser, member of our church choir and church committees as well as a selector of future priests in the Church of England. For me retirement involved conducting services on most Sundays, taking weddings and funerals when asked, being a town councillor (including mayor for one year) and continuing as a school governor - an area in which I served for 40 years in 9 different local schools.

Finally a challenge with which I am still trying to cope and remains an area for research: the tendency for some long term diabetics to have difficulty recognising the onset of hypos.  I have found this especially difficult during the night when asleep. Over the years my wife was able to help me to drink a sugary drink which normally - although occasionally after some violent outbursts and some resulting high blood sugars - brought me back to normal.

Recently I began retiring to bed, having texted my next door neighbour daughter with my blood sugar reading(!), with a self-purchased hypo band on my wrist (with an link to an App which rings emergency family numbers when activated, an alarm that should alert me when my skin gets cold (GiantBionsensor) which is  attached to my leg (both of which in my experience elicit no comment from medics) and a Life Line to call for help, including an ambulance if necessary from the local authority. In particular the fairly frequent rise or fall of my overnight blood sugars - sometimes by as much as 10 - remains a mystery to all the experts.

I find it hard to accept that my experience is unique and so I wonder what investigations or trial are in hand?

(To comment on Roger's story please email the digital team at web-updates@diabetes.org.uk.)