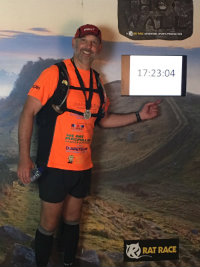 Dan's been on quite a journey

“In July 2006 I was serving with the RAF in Afghanistan. I was woken in the middle of the night by our Operations Officer who said I needed to pack a bag as I‘d be going home. I knew immediately that something bad had happened.

When I arrived at work, bleary eyed and full of fear and anticipation, I was told that my son was in a coma in intensive care but he was going to be okay.

When I called home it was then that someone mentioned the word 'diabetes'. 12 hours later I arrived at his hospital bedside, still wearing my flying suit and carrying my body armour, and started the process of understanding how diabetes was going to affect our family’s lives.

We knew little about diabetes but in the 10 years since that fateful night we have had to learnt a lot.

My son, like all the other young people in the UK who have developed Type 1 diabetes seemingly out of the blue, has had to test his blood about five times a day and inject insulin for everything he eats.

If he spends a night at a cadet camp or even goes for a run, he has to plan ahead to ensure he stays safe. There is currently no cure, so his dream to follow in my footsteps as a RAF pilot is impossible.

Funded purely by charitable donations, Diabetes UK are working hard to understand why young people contract Type 1 Diabetes so they can stop it happening to anyone else. They are also funding pioneering stem cell research with the aim of providing a cure for those who already live with the disease.

The event itself (The Wall Rat Race 2016) was really too much to take in at the time I entered. I knew my only tactic would be to run with some of my teammates and it became immediately obvious that Sophie (my buddy from the 40 mile ultra we did in training) and Jonny would be perfect companions as we travelled at similar speeds.

I’m so grateful for their support during the race. My hardest time was from about 30 to 40 miles where I faced my own ‘wall’ of introspective silence, nausea, cold sweats, lethargy and, for some reason, stabbing ankle pain. Luckily, jelly babies and caffeine gels sorted me out and towards the end I felt, with a large pang of guilt, actually quite good.

I was amazed at how committed everyone was to completing this challenge; to watch people conquer their ‘wall’ and fight through injuries to raise money for their various causes really was inspiring and felt a great thing to be part of.  I will definitely do more ultras to have that feeling again in the future.

There is no one average on this run.

My favourite quote of the event sums up The Wall for me. In the cold darkness of our last 7 miles we were overtaken by a lone runner from Newcastle who we had bumped into several times during the day.

As always, he asked us how we were doing as he passed by; Sophie, fighting the urge to stop due to her knee pain, replied with a chuckle that she was feeling ‘average’. As he disappeared into the darkness, our friend replied ‘There is no one average on this run’."

If Dan's story has inspired you to do something amazing, order our fundraising kit or contact your local fundraiser to find out how to get involved.