Diabetes is just another part of my life

In 1952, at the age of two, Sheryll was sent to live in a home to help control her diabetes on the advice of doctors. Her parents moved to be near her and provided her with love and support to help her manage her condition at a time when large needles and glass syringes were the norm. Sheryll dedicates her story to them. 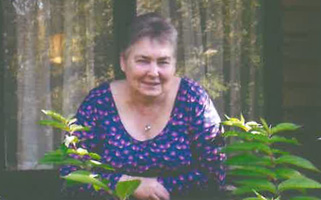 My story begins way back in December 1952, as told to me by my mother. We were on holiday in Hayling Island on the South Coast of England in  August of that year, when eating an ice-cream on the beach with my mum, dad and brother Barry, I was stung by a wasp.

At the time I was 16 months old. I was inconsolable, to the extent that we all had to return home to Camberwell Green in London. I rapidly went downhill, losing weight and was taken eventually to Kings College Hospital.

There, so the story goes, as it was nearly Christmas, my mum and dad went out looking for presents and on their return to the ward whilst sitting by my bed, there came a long line of medical staff consisting of Matron (at the front), followed by the consultant, junior doctors and a couple of nurses.

They stopped by my bed and the matron said: 'Mother, we now know what is wrong with your daughter - she is diabetic.' They were looking very pleased with themselves. I was 20 months old and my journey with Type 1 diabetes as my companion had begun.

I was under the care of Dr RD Lawrence(co-founder of Diabetes UK) for some while, who I remember always wore a winged collar with a suit, but to me seemed a very kindly gentleman who smiled a lot, and told my parents that he had not had such a young patient to treat before. I also saw a very kindly doctor, Dr Oakley who I remember had white hair and when I moved to St George's to my astonishment was seen by his son!

For my poor parents my diagnosis came as a complete shock as they had not heard of diabetes before and knew nothing about it as no one in either family had had it. For them it was a steep learning curve, as of course they had to learn how to inject a very young child twice a day with Insulin (which must have been predominantly into my right leg, as to this day I have a dip where the muscle has wasted away).

Having to sterilise large glass syringes and equally large needles must have been very difficult, unlike now with our throw away syringes, but they did an excellent job. 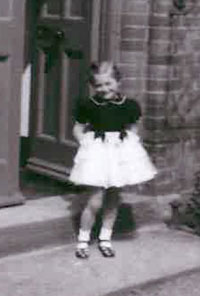 (Sheryll,pictured outside the Harpenden home where she stayed until she was six).

Trying to control my diabetes though proved to be so difficult, that it was suggested that I was sent to a residential home in Harpenden, Hertfordshire so they could monitor me more efficiently.

I was then just over two years old, and my parents made the decision to move to Stevenage so they could at least see me at weekends. There I stayed until I was six, as apparently my parents were not told that I could have left sooner, as I was 'stable'.

I remember that whilst I was at the home, I used to watch them testing the urine. There were also older diabetic children there, and one day got some ammonia splashed into my eye and can still remember the agony it caused!

When I eventually came home, my parents did not treat me any differently to my older brother, which made me quite independent. I also remember that my mum used Clinitest to test my sugar levels (no blood monitors in those days), and I think it was 10 drops of water to five drops of urine into a test tube, pop in a tablet and you hoped that the contents would change to BLUE = 0% sugar (which is still my favourite colour.)

My life continued with regular check-ups at Kings College Hospital, a long journey with my mum on the train, but the staff at Kings were so friendly and nice, and to me it seemed like an adventure. My school life was unremarkable - I was allowed to do swimming and other sport activities, although there was always something sugary in the teachers desk should they think I needed it.

I was put on lente insulin to start with, but that turned out to be unsuitable for me, so was eventually put on bovine insulin, soluble in the morning and soluble and isophane in the evening which I continue with today, and intend to stay on it for as long as possible.

I learnt how to do my own injections when I was six. I was taught by a nurse how to inject an orange with water, so thought if it did not hurt the orange then I would be OK. And it must have worked as here I am approximately 46,720 injections still going.

Life as an adult

Although I now have slight retinopathy and neuropathy in one finger I feel that I have achieved more than was expected at the time of diagnosis, as my parents were told that I may not live to an old age, yet am still here at 65. Diabetes has not interfered with my life at all, I have done things that other people have done and just got on with my life.

My journey continues. I married a lovely man Alan, who is my rock, and in a way has taken over the role of my parents and is there on the occasions when I have a hypo, which I am pleased to say is quite rare, maybe once or twice a year. We have three great sons, who now have families of their own. Having been diabetic for almost 63 years, my advice to anyone who is newly diagnosed is to try and keep your bloods manageable if you can (which is not always easy) - and not to think of diabetes as a millstone around your neck, but embrace it as just another way of life, and to enjoy a healthier way of living. It is NOT the end of the world!

I would like to dedicate my story to my parents Kit and "Steve" Stevenson as without their excellent care and help I doubt if my life would have gone as smoothly.