"Diabetes may be diabolical, but it does not rule Freddie or our family" 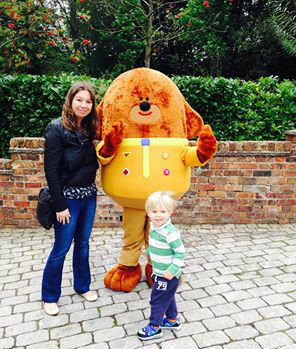 Linda Fox and her son Freddie with CBeebies character Dugee

I wasn’t surprised when my 2 year old son, Freddie, was diagnosed with Type 1 diabetes, just relieved that he would now receive the treatment he desperately needed.

It’s easy to dismiss tantrums and tiredness and what appears to be a virus as ‘normal’ for a toddler, particularly one too young to express how ill he feels, but when my son exhibited classic symptoms of the condition such as excessive bed wetting after 1 hour, drinking liquids as though they were an oasis in a desert, combined with a strange odour on his breath – I just knew.

It was a battle to convince my GP who stated “It’s not diabetes, it doesn’t happen that quickly” and gave us antibiotics for an ear infection and to “put my mind at rest”, a bottle to provide a sample of urine for testing. Sadly the test proved positive and by this stage my son was in Diabetic ketoacidosis (DKA).

The hospital team were amazing and my son was stabilised and responded so well to treatment that he was able to return home after four days admission. The brief education we received on injecting insulin, the equipment involved, hypos and hypers and diet were mind boggling at the time, but are now second nature as we have learnt ‘on the job’ and it’s become our ‘normal’.

Freddie is aware of his condition and knows he is not the only one to have it – he is not alone. A TV programme called ‘Get Well Soon’ aimed at children focused on Type 1 diabetes for an episode and Freddie was glued to it. He recognised all the terms, the equipment to inject and more importantly he understood that it was ok to have this. This was a big help in helping explain to him gently that he has this condition, and he simply accepts it.

It was initially harder for me to accept why this had happened, particularly as there is no history of the condition in our family, however, my family live with it and adapt to the challenges it brings. It has not stopped us and more importantly Freddie, from doing anything any other child does and he is currently thriving at nursery and particularly enjoys physical activities such as football, rugby and climbing. His hospital paediatric team are an incredible support and his HbA1c level is currently 48mmol thanks to this, plus a regime of MDI and carb counting (which has also improved my mathematics abilities!) and life is great.

I’m now working as a Regional Support Officer for Diabetes UK where I manage the smooth running of the North West Office and organise events and conferences across the Region. I applied for a job with Diabetes UK at the first possible opportunity after Freddie’s diagnosis so I could learn all about the condition which has really helped me deal with it and I feel as though I’m fighting back.

Diabetes may be diabolical, but it does not rule Freddie or our family. It’s a game changer in life, but we just play it at its own game by rising above it and inventing new rules - and we are winning!