'Father and daughter team up to show family support'

A father and daughter team from West Kilbride took on the Great Scottish Run in October, in the hope of taking a step towards a better life for people affected by diabetes. 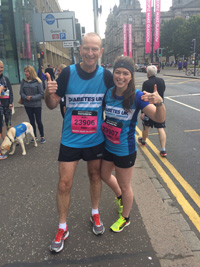 Nigel Wanless, aged 56, and his daughter Katie,. aged 19, ran the 10K through the streets of Glasgow to show their support for Katie’s twin sister, Sarah, who was diagnosed with Type 1 diabetes in May 2013.

Sarah’s diagnosis came as a huge shock to the family, and despite being in the middle of preparing for her final exams at high school, she quickly adapted to the condition with support from the Diabetes Clinic at Crosshouse Hospital.

Having passed her exams, Sarah achieved the grades to earn a place at Strathclyde University studying Primary Education, where she has just completed her second year.  “We are all very proud of Sarah, including myself and her mum Lynn big sister Amy (23) and twin sister Katie who themselves - we have also learnt a lot about diabetes since she was diagnosed,” said Nigel.

“Last year, I decided to run the Glasgow 10K for Diabetes UK - as my work involves nursing home care, I ran as part of the Scottish Care team. I survived the run and my three daughters were all there at the finish line to cheer me in.

“At that point, Katie declared that she wanted to run the 2015 Glasgow 10k for her twin sister - no mean feat as, although she enjoys badminton and general keep fit, she admits herself she is not a runner!  “Katie is also a student, studying Genetics at Glasgow University.

She had to try hard to get enough stamina to do the 10K, but she had witnessed herself the fantastic atmosphere and encouragement all the runners experience at the Glasgow event and this helped us to huff and puff our way to the finish line!”

Nigel explained why Diabetes UK need as many people as possible to join the Diabetes UK fundraising team. “Sarah is dealing really well with her condition, helped greatly by the technological advances already made during recent years. Of course, the ultimate would be to find a way to kick-start her pancreas back into action - Diabetes UK and leading global research may just manage that.

Otherwise, further technological advances to aid or even automate the self-administration of insulin will not be far away now, from which Sarah will benefit. “With diabetes we feel that it can sometimes be overlooked and seen to have a "lower priority" for funding but we obviously disagree, as it affects more people than one may initially think and in many different ways.

Taking part in events such as the Great Scottish Run is a fantastic way to do your bit and have fun at the same time Every little helps and small donations could eventually lead to a huge breakthrough, so get involved!” For further information about joining the Diabetes UK Great Scottish Run team for 2016, please contact Regional Fundraiser, Susie Williamson, by calling 07515 974125 or emailingsusan.williamson@diabetes.org.uk.