Six dads who live with Type 1 – or have a child who does – share their stories.

Andrew: “We wanted to show that this juggernaut that crashes into people’s lives can be used as a force for good” 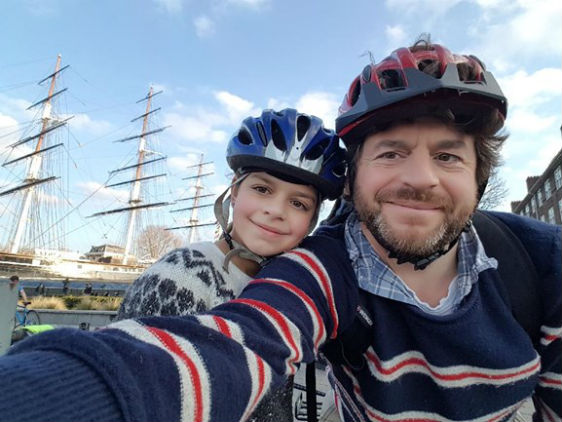 "When Bia was diagnosed with Type 1 diabetes at the age of five, we were devastated. We had no idea about what Type 1 diabetes was or what it entailed. I managed to hold it together until the following morning. One of the cleaning ladies on the ward asked me about Bia I said that she would never be able to remember a life without diabetes, then burst into tears. In true British style, she brought me a cup of tea.

"Bia is now 11, and is incredibly strong and resilient – like all children growing up with Type 1. This year we decided to cycle 54 miles from Hayes to Brighton together with a local bike club. We did a few training rides building up to the big day. The ride was a microcosm of living with diabetes – managing blood sugar all day while exercising, carb counting for the snacks, ups and downs with her bloods being reflected in the hills, struggling at times but never giving up. I was so proud of her. It took all day but she made it.

"We want to show that this juggernaut that crashes unwelcome into people’s lives can be used as a force for good. Type 1 diabetes doesn’t mean everything has to change. Six years into our journey, being able to give people whose lives have been turned upside down by this diagnosis some hope makes any achy legs more than worthwhile."

Andy: "She's very protective of my condition and often tells me if she had three wishes, the first one would be that I didn't have diabetes any more" 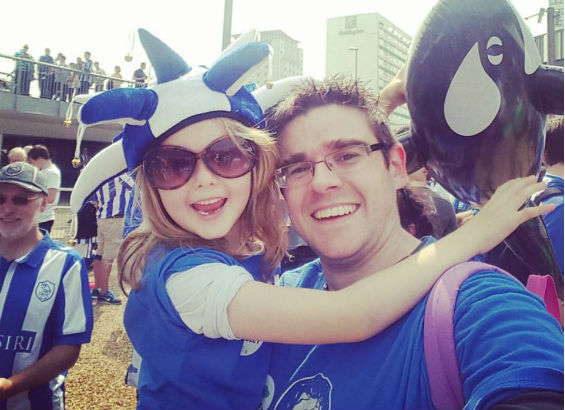 "I've always felt it was important to talk to my daughter Violet about my Type 1 diabetes.  She's grown up with me having diabetes and had questions about why I had to inject and now about my insulin pump too. I've always been honest with her about what diabetes is and how it can affect me. She knows about hypos and hypers (though insists hypo should mean high and lowpo should mean low...)

"We haven't discussed complications (it's a bit much for a 7 year old I think), but we've had a number of chats about what she should do if it's just me and her at home and she found me unconscious (or can't 'wake me up') so she knows how to ring for an ambulance, tell them I have Type 1 diabetes and what our address is.  I feel bad that I have to prepare her for something that should hopefully never happen, but it's important.

"She's very protective of my condition and often tells me if she had three wishes, the first one would be that I didn't have diabetes any more. She always wants to help when I need to change my cannula and would quite like to 'have a go' on my pump, though she knows it's not a toy.

"I think having Type 1 makes me more paranoid about her. I know it puts her at a very slight increase in risk of Type 1 herself so it's easy to get over protective and worry when she gets ill, but I know the symptoms and I do my best to put it out of my mind for the most part. I feel bad when a hypo gets in the way of me doing something with her, but I'm so lucky that she really understands." 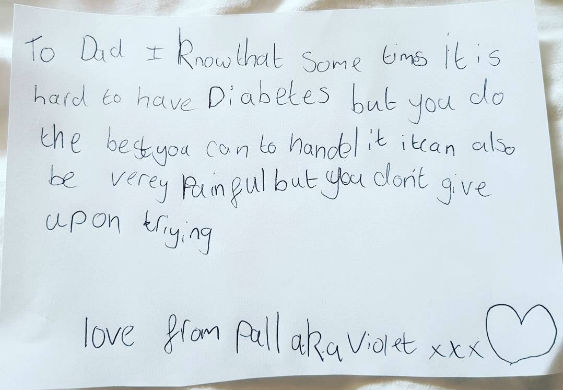 Letter from Violet: "To Dad, I know that sometimes it is hard to have diabetes but you do the best you can to handle it. It can also be very painful but you don't give up on trying. Love from Pall aka Violet

David: "Life with Type 1 means having to be resilient" 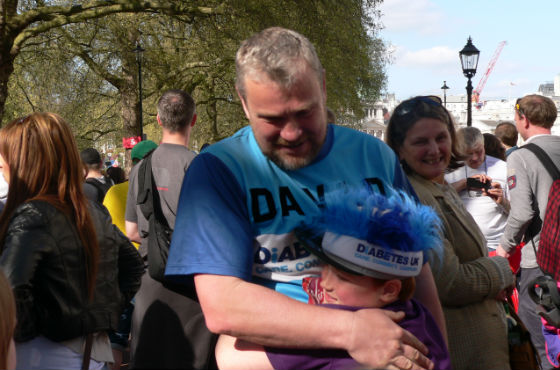 "However remembering when Ollie was first diagnosed five years ago at the age of eight will always bring a smile to my face despite the worrying situation. He loved gadgets and was obsessed with the remote control that could raise, lower and fold his hospital bed. So while my wife and I were having serious, life-changing conversations with the diabetes nurse, I could hear the slow hum of the bed’s motor. Out of the corner of my eye I could see Ollie firstly lower himself on the bed, before raising it to what seemed like ceiling level and, with a mischievous grin, almost folding the bed in on himself in slow motion – all the time finding it the funniest thing in the world. I knew then that somehow, we would be alright.

"Living with Type 1 means having to be resilient. There are lots of ups and downs but Ollie is determined to take charge of his diabetes and not let it stop him doing what he wants to do. Next year he is going on a school rugby tour to America and Canada.

"Life goes on, but I also want him to know that we’re not complacent with his illness and that we and Diabetes UK are constantly trying to find new ways to improve the lives of people with Type 1. That’s why three years ago and this year I decided to run a marathon for Diabetes UK, raising £3,400 and £2,855 respectively in celebration of my amazing son.

Gareth: "Having a dad with Type 1 has probably helped Benedict adapt to it so quickly" 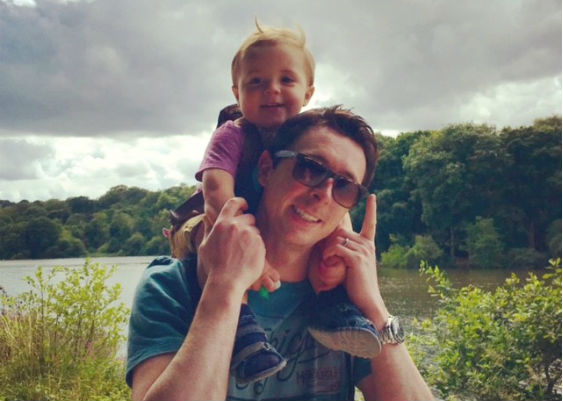 Gareth and son Benedict both live with Type 1 diabetes

"I was diagnosed with Type 1 diabetes in February 2007, when I was 25 years old. I was aware of diabetes from an early age as my uncle had Type 1. But that didn’t stop me feeling scared about the thought of having to inject myself every day for the rest of my life. Support from my diabetes team and my family helped me deal with the diagnosis and get on with my life.

"Then ten years later to the day, my two-year-old son Benedict was diagnosed with Type 1. I was devastated that my little boy was ill. It really upset me to think he got this condition from me. It was an emotional time, but my wife and I needed to be strong so we could support him.

"Having a dad with Type 1 has probably helped Benedict adapt to it so quickly. To get him used to testing his blood, I try to test mine at the same time. And now I use an insulin pump, I show him how I fit my cannula. He’s moving onto a pump in summer so it’s important to get him used to it.

"My hope is that in Benedict’s lifetime new treatments will be developed that transform what it means to have Type 1 diabetes – or cure it altogether. Until then, the best thing I can teach him is how to manage his Type 1 while living a normal, happy and healthy life."

Jamie: “Becoming a dad showed me it was time to get in control of my Type 1” 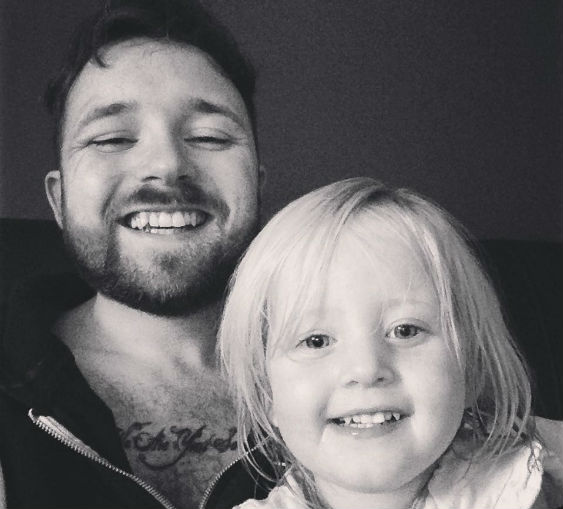 "As a young adult I found it really difficult to control my diabetes. I would hardly test my blood sugars, I didn’t understand the concept of carb counting and I was at an age where I would be out on the town with my mates drinking. At the time, I had no solid commitments and no reason to think about the effects that this would have on the future. Until I met Mel.

"Fast forward a few years, Mel and I had our first child and were engaged to be married. When our daughter entered my life I had this sudden change of thought and started thinking about the damage I was doing to my body. I wanted to be around to see her graduate, walk her down the aisle, and be there for her when she needs her dad. It was time to grab this bull by the horns and take control.

"Since then my blood sugars have improved dramatically. I test a lot more and have a solid understanding of carb counting. I feel a lot more confident when talking about diabetes and sharing my experiences with other people in the hope that they will learn from my mistakes."

Simon: “Don’t forget your child is still the same wonderful, precious person they were before they were diagnosed with Type 1” 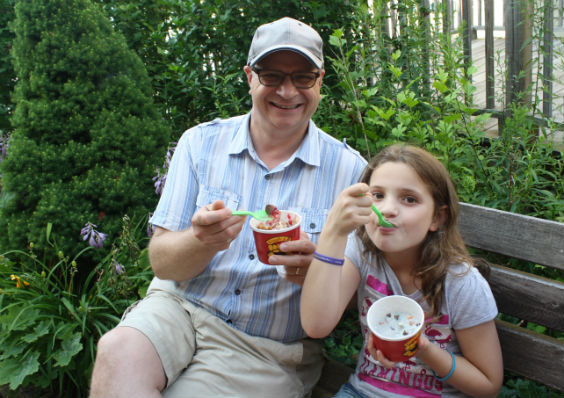 "Just after my daughter Cari was diagnosed with Type 1, we were planning our summer holiday. My wife and I had a lot of conversations focusing on diabetes. We finally decided to go on holiday in the UK where we knew the healthcare system and could speak the language. We ended up letting diabetes drive what we did.

"Since then, we’ve taken the view that diabetes will not stand in the way of our daughter or our family. We decide what we want to do first, then find out how to handle the diabetes side of things second. Yes, it means more planning and research beforehand, but we are in control of the diabetes, not the other way around. After that first year we’ve been lucky enough to enjoy several foreign holidays, including some with long-haul flights. As long as you plan carefully, diabetes doesn’t need to be an issue.

"My advice to any family going through diagnosis is to remember that your child is still the same wonderful, precious person they were before they were diagnosed with Type 1. Don’t let them, or you, be defined by what at first seems like an overwhelming condition. It takes a little while but you do reach a ‘new normal’."