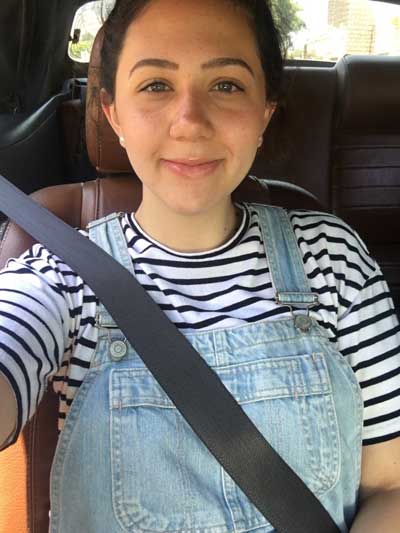 In June 2016 when I had my first appointment with my GP after being diagnosed. I planned to go in and ask what the NHS will cover for my treatment. I was wearing an insulin pump at the time and I had no need for needles, so I can understand why this was not brought up as something I should have on my prescription. He told me that the NHS will cover my insulin.

Coming from Lebanon where all medications and medical supplies are privately paid for and can be quite expensive, I was happy with this. I continued to buy my test strips privately, unaware that this is something that was supposed to be covered. Months later, I was told that after reviewing my case, I will not be funded by the NHS to wear an insulin pump.

In January 2017, I began with insulin injections. Nobody told me that I was entitled to have needles and test strips covered. After speaking with my diabetes specialist nurse, she was outraged that nobody had informed me of what the NHS is supposed to cover. She wrote a letter to my GP stating everything that I need and the specific details to amend my prescription.

I went to my local Boots to pick up my prescription to find that a different set of test strips from the ones my nurse had specified had been put on. Test strips that I don't have a corresponding meter for. Frustrated, I went to see my GP where I was told that the strips I was asking for were too expensive. I gave the names of 3 different meters that I own saying I'd be happy to use one of those. Still, I was told that they were all too expensive. No alternative was suggested by them.

After I told them that I had no test strips and was in serious need, I was prescribed the strips of my choice on a one time basis. After seeing 3 different GP's at my local service, one of them prescribed me 150 strips per month. I was very happy with this given the whole struggle to get to this point.

Unfortunately, I have found that my prescription is frequently changed. My strips are taken off or reduced practically every time I order a repeat. The man who works at the prescription counter at my local Boots now recognises me and has seen the struggle that I have gone through with my prescription. He has even called my GP trying to help me to amend my prescription.

I hope that by sharing my experience, we can draw more attention to the serious problem that is the NHS cutting costs on things such as test strips. As a diabetic, testing our blood sugar frequently is essential in managing this tedious and draining condition. These provide a comfort and safety for us. If we are not provided the tools to properly monitor our glucose levels, we will likely have many problems in the future. Problems like kidney failure, neuropathy, retinopathy, and cardiovascular disease. Problems which are far more expensive to treat and take care of than a bunch of test strips.

Find out more about test strips and meters - including a support pack to help you challenge test strip restrictions - on ourTesting times page.