Three of my children completed the Great North Run to fundraise for Diabetes UK. 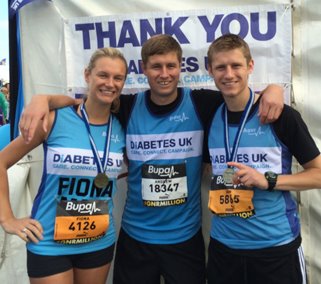 Three of my children recently completed the Great North Run with the dual aim of discovering which of them was the fastest Macpherson in our family and, more importantly, raising money to help the work of Diabetes UK.

Iain, the youngest, was diagnosed with Type 1 almost 18 years ago, so Diabetes UK was a natural choice for their fundraising efforts. Together they raised over £1,400.

Iain was diagnosed with Type 1 diabetes when he was seven years old. With the benefit of hindsight, we realised that he displayed the classic symptoms of dramatic weight loss, constant thirst and consequently the need to visit the bathroom more frequently.

He was put on to insulin injections twice daily to begin with, along with continued monitoring of his blood sugar levels. This was done initially by members of the family until Iain became confident enough to cope by himself. He adapted amazingly well for one so young, though naturally there have been some scary moments when he has had hypos.

Iain has never allowed his diabetes to prevent him from participating in any activities including football, skiing, school athletics, swimming and more recently, running to train for the Great North Run.

Throughout the time since his diagnosis he has received excellent care and support, at first from the paediatric and now the adult diabetes specialist teams at Sunderland Royal Hospital. He attends regular appointments with them and is also able to call on them for advice outside these routine appointments.

Although it is seldom said, we are very proud of the way Iain has learned to adapt to diabetes and has not allowed it to dominate his life.

We are very proud of all three of them. For the record, Iain claimed the bragging rights, finishing in 1 hour 50 minutes, proof that having diabetes is no barrier to success.