Helen won an appeal to get her driving licence back

Helen Nicholds, a 27-year-old District Nurse, was diagnosed with Type 1 diabetes aged seven. Helen’s licence was revoked in 2014 following two night-time hypos. After making a number of appeals, her licence was reinstated in 2015, six months after it was suspended. 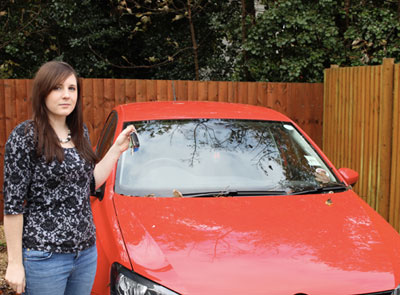 "July 2014 was a stressful time as I was studying for an exam to become a nurse prescriber at Plymouth University. The weather was really hot so I started reducing my bolus rates because my blood sugars were running on the lower side, but they were manageable and I wasn’t having any hypos during the day.

"I had two night-time hypos, which I think were stress- and weather-related. I didn’t need an ambulance or anything like that, just some assistance from my partner.

I spent hours and hours trying to sort it out with the DVLA.

"About a week after my appointment I was due to renew my driving licence. When I received the renewal form I filled it out honestly, mentioning that I had had two night-time hypos but explaining that my consultant was happy with my control and had no concerns about me driving.

"Around 12 weeks later I received a letter from the DVLA informing me that my licence had been suspended with immediate effect. I was really shocked. I had been driving during the 12 weeks prior to receiving the letter. It strikes me as ridiculous that if they really think you are unfit to drive you’re not informed of this right away by phone or email. There didn’t seem to be any real sense of urgency or concern.

"Driving is a big part of my job, working as a District Nurse in Devon, so I really feared I might lose my job. Thankfully, my employers were really understanding and were able to come up with some effective solutions that didn’t cause too many disruptions. However, as Devon is very rural and has limited public transport not having a car hugely impacted on my ability to see my family, attend my doctor appointments on time and go food shopping so I felt really isolated.

"I had to make a number of repeated appeals before my licence was reinstated. This involved lots of badgering and collate a lot of evidence to prove I was good at managing my diabetes and safe to drive before I got my licence back. I spent hours and hours trying to sort it out with the DLVA. Some of the letters I got back from them were incorrect, poorly typed and contradictory. Nobody seemed to know what was going on. I was able to get support from MPs and MEPs and I managed to get 20 doctors and nurses to write supportive letters on my behalf, which I included in my appeal letter.

"Winning my appeal, my licence was reinstated in April 2015, six months after it had been revoked but a few months earlier than expected. I know that I’m very fortunate to get my licence back so soon as this isn’t the case for many other people with diabetes. I think if I hadn’t have been so persistent with them I might not have got the outcome that I did and I suspect there are lots of other people who will just give up.

"The DVLA has never explained their rationale for reinstating my licence after I appealed. I don’t know what grounds their decision was based on. But I do know that the grounds for revoking my licence didn’t seem to make any sense at all."

It is because of stories like Helen's that we are campaigning to change the rules about diabetes and driving and make the system fairer.

Find out more about the campaign and how you can help.