'I reached the summit for Diabetes UK' 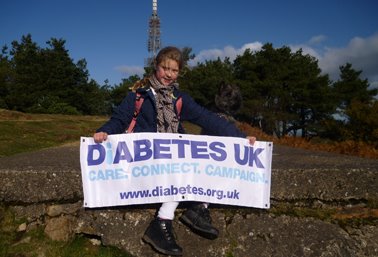 Chloe, aged 12, so enjoyed her weekend away through the Diabetes UKfamily holidaysthat she decided to raise funds to say ‘thank you’.

Her parents Angela and Darren, had already raised £1,000 for their local Diabetes UK support group, which supports children with diabetes in the area. Chloe persuaded her Dad to join her and walk up The Wrekin, a hill measuring over 400 metres high in Shropshire, with their family dog Toby and raised £92 for Diabetes UK.

Chloe completed the challenge in 45 minutes and was delighted to reach the summit. As exercise for someone with diabetes can affect glucose levels, Chloe prepared for the walk by having some extra carbohydrates before setting off and then eating a few glucose tables on the way.

Her Mum, Angela, said:  “We are very proud that Chloe organised this herself and raised the money.  It showed me again how Type 1 diabetes doesn’t stop Chloe living a normal life but it is something you can never leave behind. Chloe finished her challenge, but then what would for most people have been the end of the event, meant she had very low blood sugars during the night due to the extra exertion.

What is a small walk up a hill for some people became a night-time challenge for Chloe.

“Diabetes UK has helped us lots since Chloe’s diagnosis.  Earlier this year we went on one of their family holidays which was a fun weekend for Chloe and her 9-year-old brother Callum, and a chance for Darren and I to share our experiences with other parents who have children with diabetes.

Chloe found it so helpful to meet other children with the same condition as her and they have remained friends, sharing what living with diabetes means, which is there 24 hours a day, seven days a week.”

Chloe and her family are supporting Diabetes UK'sChildren’s Campaignto raise awareness of the 4T’s – Toilet, Thirsty, Tired and Thinner, the four main symptoms people experience before they are diagnosed with Type 1 diabetes. If more people were familiar with them it would save hundreds of children each year from becoming life-threateningly ill before they are diagnosed with the condition.

Chloe said:  “It took a couple of months for me to be diagnosed and yet I had all the classic 4Ts symptoms.

Luckily I didn’t become dangerously ill but I wasn’t far off it and I wish I’d known what my constant thirst, going to the toilet all the time and losing weight meant. I hope as many people as possible get to know the 4Ts to help spot the symptoms in their friends and family, which would have really helped me and stopped me having a very unhappy summer feeling unwell.”

Diabetes UK runscare and family eventsthroughout the year which are aimed at developing positive attitudes and establishing self-confidence in the management of diabetes. They cater for children, young people and their families and take place across the country including Scotland, Devon, Surrey, Northamptonshire and many more locations.