I simply didn't know the symptoms of Type 1 diabetes

Amy is 'up for doing her bit' to make people more aware of Type 1 diabetes after her son spent a week in intensive care.

If I or someone else around Isaac had known these symptoms, perhaps we could have avoided those terrible weeks of suffering. 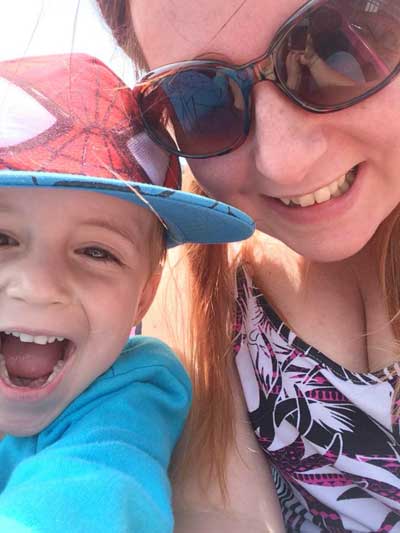 It all seems very obvious now. And looking back it is easy to spot. But a year ago I didn’t have a clue what the symptoms of Type 1 diabetes were. And I only found out when my three-year old son Isaac went into diabetic ketoacidosis (DKA).

As you can imagine it was a terrifying experience. As we rushed to A&E to get Isaac treatment we didn’t know what had happened, but it wasn’t long before the doctors and nurses in the hospital realised what was wrong.

Isaac had a blood glucose level of 39, and a PH level of 6.8. Its only afterwards I realised what these figures really meant. Even at the time though I knew something was seriously wrong, as Isaac spent a week in intensive care.

Thankfully, after some brilliant treatment from the hospital staff Isaac improved and recovered.

He’s now getting ready to start school in September and is like a different child. It is still early days but we are adjusting to living with Type 1 diabetes.

Isaac’s doing well now, but I know during the week in intensive care and the weeks that followed he was in serious trouble. In part I blame myself for not spotting something was wrong sooner, but then like, I suspect, the vast majority of parents, I simply didn’t know the symptoms of Type 1 diabetes.

Now I’m campaigning to make people aware of what to look out for, and to give them information on what to do. Looking into this, I discovered Diabetes UK’s ‘4Ts’ campaign which aims to raise awareness of the four most common symptoms of Type 1 diabetes: toilet (going a lot), thirsty (unable to quench it), tired, thinner.

How we can make things better

If I or someone else around Isaac had known these symptoms, perhaps we could have avoided those terrible weeks of suffering. We need new parents, schools and health care professionals to be more familiar with the 4Ts, as they really could save lives.

It will take a lot of work to make more people aware of Type 1 diabetes, but I’m up for doing my bit. I’ve signed up with Diabetes Voices specifically to work on this.

I’m speaking with Isaac’s new school about arranging presentations for staff and students next year on Type 1 diabetes, its symptoms and its management. I’m also ordering the free ‘4Ts’ posters from Diabetes UK to stick up around my area.

As I mentioned, starting school will be another step our journey with Type 1 diabetes, so I’m pleased to see Diabetes UK also campaign on good care in schools through the ‘Make the grade’ campaign. I want Isaac to have the same chance to learn as anyone else in his class, and to do this he needs to be able to manage his diabetes, with support from school staff, whilst he learns.

Type 1 diabetes can have a devastating effect on children’s lives, and on families. If recognised early though, so much of the pain and stress can be avoided. I’d encourage everyone, whether you have a child with diabetes, whether you have the condition yourself or have no connection at all with diabetes, to do everything you can to make more people aware that Type 1 diabetes is really serious.