Hear howblogger Cornflake Traveller is 10 years and 64 countries into travelling the world with Type 1 diabetes.

I grew up in the South of England, went to college in London, then University in Nottingham where I earned a BSc in Genetics. On graduation I was faced with the prospect of joining the rat-race but chose travelling instead and in 2002 I began travelling around the world.

When asked what I do, I tell people I am a traveller, author and a film maker but this always misleads as these are my passions, professionally I am a jack of all trades. I have worked as a courier in New York, a scuba diver in Honduras, a research lab assistant, a Data analyst, a chef, a holiday Rep, a shelf stacker, and a host of others.

All these were just ways to earn travel money as I don’t want a career rather I want to spend my life experiencing as many things as possible and doing things that interest me. Travelling provides the variety in life that my soul obviously requires so I continue to explore as I attempt to eat a bowl of corn flakes in every country in the world. I am now 10 years and 64 countries in to my mission. 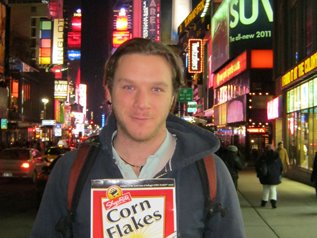 I continue to explore as I attempt to eat a bowl of corn flakes in every country in the world.

I was diagnosed with diabetes when I was nine years old after three weeks of drinking and excreting at least 30 litres of fluid a day.

The things I remember the most about the first few years of being a diabetic are the multiple times I was told that I should have good control or I might develop complications and reduce my life expectancy. I think the intention was to inspire me to take care of myself but it actually made me think, well I better enjoy life now while I can and it instilled an “I’m here for a good time not a long time” attitude in my personality.

My hypos have given me some amazing experiences that most people don’t get to encounter.

Of course I would like to live for a good long time but I won’t spend my life worrying about death to the extent that it stops me living. I was lucky as I had many members of my family in the medical profession and fortunately always had someone there that could take care of me in an emergency and encourage and guide me to take care of my diabetes. Although I am travelling much of the time, I make sure that I get checked out whenever I come home, I am also very aware of the condition of my eyesight, blood pressure, the feeling on my feet and of course I check my blood sugars on a regular basis.

Now after a decade on the road I would like to inspire people with diseases (in particular diabetes) to not let their disease get them down and stop them doing the things they want to do. For a long time I used to think of diabetes as a negative thing in my life but over the years I have come to realise that it has brought me positive things too.

It has made me very aware of the things that I put into my body meaning I generally avoided eating junk food and allowing other people to inject me has been a brilliant ice-breaker. Best of all some of my hypos have given me some amazing experiences that most people don’t get to encounter.

Hypos are annoying but on reflection some of them have been fascinating, such as the time I came home from South America to surprise my family and came home to an empty house. I fell asleep exhausted from travelling and had a hypo while sleeping, I woke up still going hypo and in an altered state of consciousness thought I had died and gone to heaven.

For an hour I wandered around the house before I had some sugar and eventually came round, this was quite an emotional experience I can tell you and I burst into tears, mainly tears of joy as I realised I wasn’t dead. It is difficult to express in words the emotions that I felt but again on reflection what an experience and one of many that in hind sight outweigh any negative side of my disease.

So being diabetic might make what you want to do with your life more difficult to achieve but not impossible and I’m sure it will make you a stronger person.

Peace and Love to you all.