"All my life I have ever known one family with a child with Type one diabetes. I clearly remember thinking "if that happened to me I don't think I could cope. 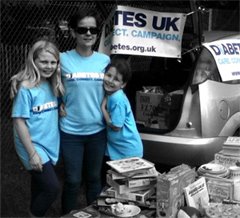 However in June 2010, my eldest daughter was diagnosed at ten years old. The signs and symptoms were there screaming at me, but I never knew enough about it to recognise them. All I knew was that the person drank and went to the toilet a lot!

Phoebe had always drank lots of water so that passed me by, but I did get alerted to her going to the loo a lot. I remember thinking it to be odd and 'out of character' and diabetes vaguely crossed my mind.

During our break at Center Parcs she became unwell and started to sleep walked a lot (as she had been doing through the summer holidays.)

When we returned home a parent at her dance class remarked on how much weight Phoebe had lost. As the thought had been prevalent in my mind, I went straight home and looked for 'daibetes' in my Children's Medical Journal. The symptoms were too many to be a coincidence. 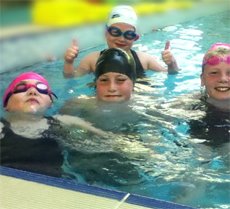 I contacted the friend I had mentioned earlier and we went over the following day and her son tested Phoebe. When my friend showed me the reading (23.8), I'm ashamed to say it meant nothing as I didn't know what a normal reading was.

That night was spent at James Paget Hospital and the following day life with diabetes begun. As for the impact on our family, I think it was Phoebe's younger sister, Ruby, that suffered the most. She was only six and really couldn't understand the sudden shift of attention. Trying to explain it all simply to a six year old was tough.

Phoebe injected herself from the onset, but by Christmas she had developed a needle phobia. The evenings were the worst and sometimes one injection could take 20 minutes to do. We managed to change to shorter needles and we considered the pump, but things improved, so she continues to self inject today.

We were recommended to join Diabetes UK, which we did, and received "Balance" magazine. One of the issues had a coin box with it. We decided to try to fill it 'to do our bit'. The campaign was 'Small change makes a big difference.'

I am a hairdresser so I took the box to work with me and asked my clients if they would donate. We then involved Phoebe's school and dance school and managed to raise £771.29.

The following year - 2013 - Phoebe's school was unable to help us so we had to think of something simple and effective. We decided on a sponsored walk along the beach from The Sailor's Home, Kessingland to The Jolly Sailors in Pakefield. About 10 miles in total - after all Charity Fundraisers aren't meant to be easy!

We approached Phoebe's dance school again and also her swimming club. We badly wanted to beat the previous years total so we thought we would do two car boot sales as well - one either side of the Diabetes Week.

I contacted Diabetes UK fundraising team to see if they could lend us a banner to deter any haggling! They sent three banners and two sashes and we sat the box on the front of the stall with a sign that the girls had made which read "no haggling!

The Sponsored Walk was the biggest earner next to the Sponsored Swim but the ones I enjoyed the mostwere the Car Boots. We met lots of lovely generous people. These people not only paid without haggling, they shared their stories and asked us questions. So many people just donated without buying our stuff.

I was overwhelmed with the kindness and how good that made us feel - so much so we did a third one! We raised a staggering £1270 in total. I approached our local paper - The Lowestoft Journal/Eastern Daily Press - and they did a big feature on page three! I asked them to include the 4 Ts and Diabetes UK's contact details - which they did!

So now we look forward to next years' fundraising events. We've raised the bar of course ... but it will be a challenge to beat it and a focus for us as a family."