I immersed myself in diabetes and now know so much more

After 20 years of living with diabetes, Jenni thought she knew everything she needed to know. Until she went on a DAFNE course. 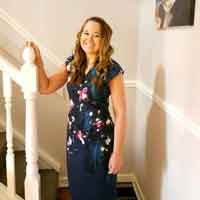 I don’t remember not being diabetic, although I do have vivid memories of how unwell I was before I was diagnosed at the age of six in 1990.

I remember the paramedic wrapping me tightly in a blanket and carrying me out to the ambulance – I also remember hoping that none of my friends in the street saw me wrapped up like a baby.

I know that I was admitted to hospital and diagnosed the day that Margaret Thatcher stood down as Prime Minister; my parents talk about hearing the doctors in the hospital cheering when they heard.

For three weeks and two days I was kept in Ward 7b in Yorkhill Hospital in Glasgow. I just made it out in time for Christmas.

It was incredible to spend five days immersed in diabetes and speak to people who knew exactly how I felt.

As a six-year-old girl my favourite TV programme was Casualty, I was obsessed. So, being in hospital didn’t always feel like a hardship. I remember thinking it was ‘cool’ that I had to have injections twice a day and I absolutely loved all the ‘kit’ that came with being diabetic.

I have fond memories of my ‘box’. It was black and kept in the fridge and stored my vials of insulin and my syringes. I often feel lucky that I was diagnosed so young; I didn’t know any different and I did what I was told to do and ate what I was told to eat, within reason of course. My parents did so well to look after me, my Mum in particular as she and my Dad are divorced.

When I look back on my childhood I don’t automatically think ‘diabetic thoughts’ or pick out times that I took unwell or couldn’t do or eat something because I wasn’t allowed.The good practices my parents instilled in me largely remained, but being diagnosed so young and living a relatively hassle-free life with diabetes led to the worst thing: complacency.

I coasted with my diabetes – it was never so terribly controlled that I had to be admitted to hospital, but it was never that brilliant either as I got older. In my late teens and twenties I enjoyed myself; went on holidays with friends, stayed out all night and drank far too much. It never seemed to occur to me that recurring bouts of thrush or feeling lousy were anything to do with poor control. I never tested my blood sugar either.

From the age of around 16 to 28 I could safely say that I ordered less than10 repeat prescriptions of glucose testing strips. If I ever did take the notion to test I would often find the meter had run out of battery or the code on the bottle had expired and the meter would not accept it. When I spoke to other diabetics who regularly tested or cited problems with their control I would inwardly turn my nose up at them – what did they think they were doing and why did they complain so much?

There are worse things in life to be diagnosed with and doing a few injections a day and feeling guilty about eating chocolate (but still doing it) is hardly awful, is it?

Over the years family tried to help and encourage me, so did friends and my diabetic team at the hospital, when I bothered to turn up for appointments. And then things started to change. Retinopathy screening revealed damage to the backs of my eyes – but then, after more than 20 years as a diabetic, surely that’s just normal? And then I got sent to a specialist following a screening appointment. He was very clear that the damage wasn’t bad, but where it was, was the concern.

Whilst I walked away feeling guilty and that I should try, it wasn’t enough to make me look at my control. But then, just before I was due to get married my Mum had a very frank conversation with me. Whilst it was acceptable that she took care of me when I was younger and that she still looked out for me, I was being unfair to my future husband (David). And that did strike a chord. I felt like a ticking time bomb.

My Mum and Dad had watched me grow up and had to deal with fitting through the night, severe hypos, hyperglycaemia and the risk of complications, but David hadn’t. And then my diabetic clinic offered me a place on a DAFNE course. I treated it initially with the same disdain that I had with all things diabetic.

Five days in a room with other diabetics and some stuffy nurses – what could I possibly learn? After about half an hour I felt the most overwhelming feeling of shame. I thought I knew everything and it turns out after more than 20 years, I almost knew nothing.

It was incredible to spend five days immersed in diabetes and speak to people who knew exactly how I felt and the reasoning I applied to my control. For example, if I felt high (not that I tested) I would inject five units of humalog. Why? Because four didn’t seem enough and six would be far too much…

By far the biggest shock was hearing from one of my fellow group that the DVLA had revoked their driving licence. I rely on my licence for my job, I had no idea this was a possibility.It may sound like a cliché, but DAFNE changed my life.

I felt like I had discovered who I really was and I felt so much better for it. I also appreciated how serious a condition diabetes is and how lucky I had been to live in relative good health for so long. It also made me realise how much of a knife edge it can be and control can slip away even when you try hard to keep it. Through very hard work, I gained control. And it was only when I had the control that I realised how bad things had been for so long.

Despite the hard work that applying the DAFNE principles can be, it somehow seems so much easier and it is true – there is no guesswork.I attended the DAFNE course just over two years ago and cannot stress the benefits it has brought me. That’s not to say that I haven’t let things slip at times, I would be telling a lie if I didn’t own up to that.

Every now and again I get fed up of being diabetic. Of knowing that in the back of my mind something will spike my sugars or drop it and that I need to make adjustments. It doesn’t go away, it’s always there. I remember meeting an old friend from school and they asked, “are you still diabetic?"

I liken my diabetes to an imaginary friend. It’s always there, no one can see it, but it influences me in what I do and how I think and it can make me do silly things (like eating a packet of digestives at 3am in the morning after a hypo).

I picture my diabetes as a six-year-old girl with blonde hair (like I was back in 1990), but even though I have grown up, she still walks beside me everywhere I go. You would think after 25 years that we would have learned how to live together well, but every day is a challenge and, just like I was when I was six, my imaginary friend doesn’t always behave very well. But, she’s my friend and despite all the challenges, she shapes the person that I am.