"Nothing can stop you. You can do anything."

12-year-old Jessica wanted to give something back to Diabetes UK after attending a family weekend run by the charity. 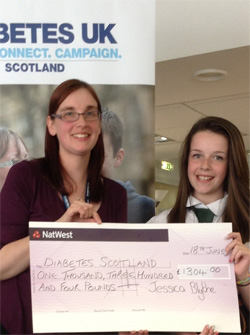 Diabetes Scotland was delighted to meet with Jessica Blythe and her family recently, when she dropped into the office in Bath Street, Glasgow.

12-year-old Jessica, who has Type 1 diabetes, raised a fantastic £1304 through the 2014 Kiltwalk, a 13 mile walk from Clydebank Park to Balloch Park in Glasgow in April.

She was greeted by National Director, Jane-Claire Judson, and the team at Diabetes Scotland who were so impressed by Jessica’s attitude to living with Type 1 diabetes at such a young age.

Shortly after she was diagnosed in 2013, Jessica and her family, who live in Erskine, attended one of Diabetes UK’s family weekends in Edinburgh. This event, which is designed to provide support and opportunities to meet and learn from other people with diabetes and to share experiences in a relaxed, informal environment, helped Jessica to gain skills and confidence to manage her diabetes.

“It was only a few weeks after I was diagnosed and there were loads of other kids there who were diabetic as well,” explains Jessica. “I met people that were going through the same stuff that I was going through, or had went through what I went through, it was really helpful because they seemed ok, and they weren’t upset about it, so it just kind of showed me that (diabetes) is not going to do anything to me.

“At first it was a struggle, and I didn’t think I could cope, but now it is just like brushing your teeth at night – because that’s what people said, it would be so easy, like breathing – you just get so used to it. And I didn’t believe them, but now – well, now it’s just really easy.”

Jessica and her family found the weekend so helpful, that they decided to raise funds for Diabetes Scotland to help other families like their own. It was this that also helped Jessica to complete the Kiltwalk.

“I just felt that Diabetes UK did loads for me and I felt I should give them something back, and that’s why I did the Kiltwalk to raise money. It’s a bit like diabetes - when I got that, I was really stressed out but I didn’t let it defeat me and (I thought) I’m not going to let having sore feet defeat me either! So I thought, I AM going to do it. No-one thought I could do it but I told them – I can do it, you’ll just have to wait and see!”

Jessica also has a powerful message for other children affected by Type 1 diabetes:

“It seems really, really scary at first, you might feel like your life is going to end - but you just have to keep trying. Listen, take all the information in. Nothing can stop you. You can do anything. Don’t give up!”