Joe developed Type 1 diabetes in 2014, aged 37. He is a TV producer for BBC Sport. During the Six Nations he produces the live games, interviews players at press conferences, edits music montages, runs the social media accounts and is in charge of the ScrumV Highlights show which is filmed live every Sunday evening in Cardiff.

Here he describes a day in his life. 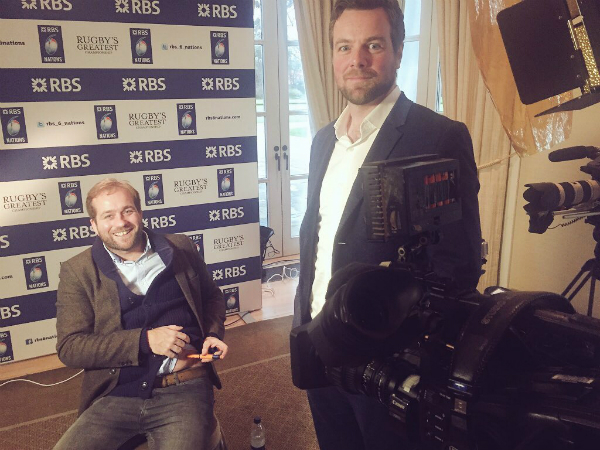 Most people wake up the day after a Six Nations Saturday with a hangover…But when you produce the Scrum V Six Nations Special show for the BBC then Sundays are the most important day of the week and you need to be fresh. I know the day will be long and possibly stressful, so breakfast is vital. I soak porridge oats in milk the night before and have it cold in the morning. I throw a few raisins in, add some coconut flakes and some cinnamon and it’s actually really tasty and hopefully keeps me going until lunchtime. 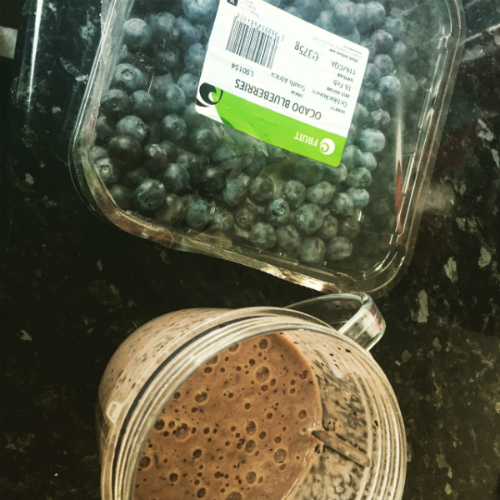 To make extra sure I’m fully loaded I make a berry and banana smoothie. Most mornings it’s one or the other - porridge or smoothie - but I know I’ll be flat out when I reach the office so I want all the extra energy I can find. I take 4 units of insulin, pack a bag of fruit and a few snack bars and head for the studios.

Like most diabetics my car is full of emergency snacks, empty bottles, wrappers….and so is my desk at work. I have to keep spare needles by my desk in case I forget mine (which happens a lot) but I’m always worried they’ve been there too long and maybe the insulin is no longer of any use.

We have a production team of about 35 people. Graphics operators, statisticians, analysts, directors, editors, researchers, camera crew, sound engineers, reporters, presenters and pundits. They are located all over the building in edit suites and studios, little rooms with no windows and machines with lots of buttons and flashing lights.

I quickly do a loop of the BBC buildings to see everyone is clear on their role and happy with the plans for the day. The BBC Wales building was built in the 60s and is not really designed for this type of programme, it’s like a rabbit warren and I spend half the day running down corridors and up and down stairs and trying to find somewhere with phone signal!

In one room we have a team of people editing highlights of the Wales win against Scotland. A win means the nation is happy and makes the programme a lot easier to make. The show has to reflect the mood so today all the music we use on the montages will be uplifting and exciting. Plus it’s Valentine’s Day so we have lots of love songs, references to love and big inflatable Love Hearts in the studio. Who knew rugby and romance could go so well!!?

Everyone drinks tea all the time, someone is always getting someone a cup of tea. I find tea spikes my blood sugar levels so I tend to only accept a tea offer 1 in 3 times. I have a terrible reputation at work for never making tea, which I blame on my ‘condition’!

There are always sweets everywhere, all the team bring in snacks because it’s a long day. I find people are a bit weird about offering me sweets since I became diabetic, they always offer them and then apologise like they’ve offended me, or conversely they are shocked if I have one. 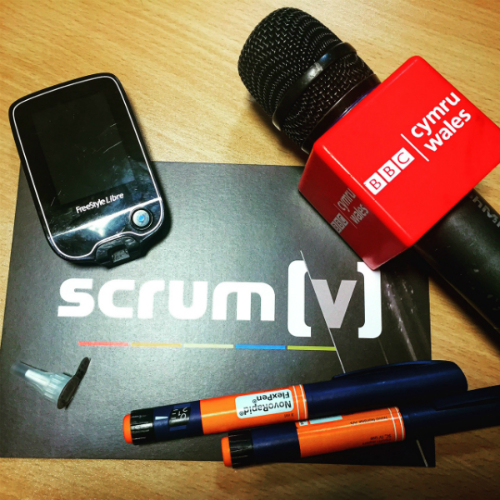 At midday we round everyone up for a meeting. It’s not the best time for me to hold a meeting as lunch is coming up shortly and I sense I’m dipping a little, but I check my blood sugar levels - 5.6 - eat a tangerine and have a sweet off somebody and we can begin the meeting. We decide what the most important issues are - Dan Biggar’s fitness, Jamie Roberts’ defence, Geoge North’s return to form, was the Gareth Davies try a try? And then we decide how we are going to talk about them, will we show examples?, will we run an interview?, how long should each section last? It’s an hour long show and there is lots to fit in.

I have recently started using the Continuous Glucose Monitor and its given amazing confidence and freedom. I used to hate pricking my fingers to test my blood so this means I don’t have to anymore. It expensive, but it’s worth it. My team probably find it strange when I swipe the electronic reader over the sensor screwed in my upper arm and it beeps…they think I’m like some sort of cyborg!

I find it’s better for me to have a meeting with slightly higher blood sugar levels than slightly low…I have had a few meetings when I’m low and it’s disastrous. I’m all anxious and short tempered. 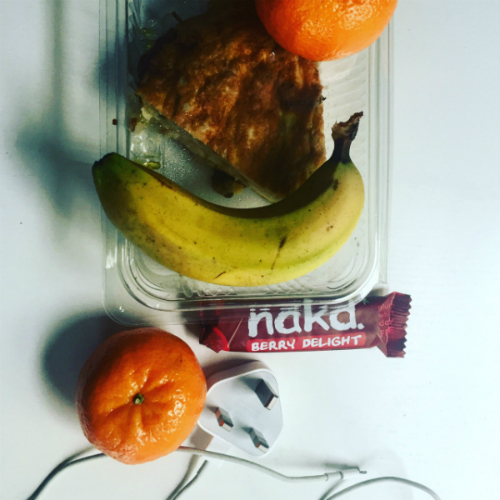 Lunchtime. I bring in my own Spanish Tortilla (bought in the deli the day before) and I order a portion of baked beans from the canteen to go with it. Yes I know, the glamour of telly!

I take 4 units of insulin. The live show doesn’t start until 7pm so I somehow need to keep my sugar levels up for the next 7 hours. This is the trickiest aspect of managing my condition.

Stress and nerves can play havoc with my sugar levels and these ScrumV Sundays can be pretty stressful. I get a text from a player who was supposed to be our ‘Star at The Bar’ (our special mystery guest) but he had forgotten it was Valentine’s Day so he’s cancelled! We need a new guest…urgently. I have to go through all my contacts to find another…and it needs to be a legend. They need to be a cult hero to be our ‘Star at the Bar’. A Grand Slammer, a Lion or an All Black…and they need to be available at very short notice, on a Sunday and on Valentine’s Day!

I send out calls and texts and emails and luckily Garin Jenkins gets back to me and says yes. I grew up watching Garin play for Swansea and Wales and I used to idolise him so to be working in a job where I get to meet him is a dream.

England are playing Italy so we watch the match in the office, and we decide which bits will go in the highlights and which bits we’ll use for analysis. 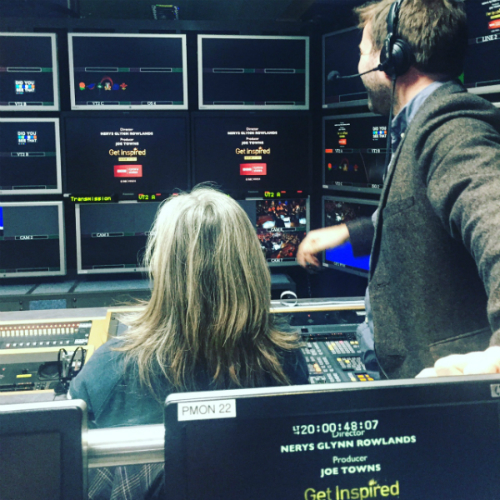 I know I’ll crash a bit at 4pm but I have some healthy snacks with me - a banana and a snack bar…and I’m back up to 6.0 on my reader.

I run the ScrumV social media accounts so throughout the day I’m always checking my phone to see what people are saying. We have almost 90,000 twitter followers and they like to know what we’re up to, so all day I’m taking photos behind the scenes and sending tweets. We put videos on Facebook and Instagram as well, and sometimes we get a bit of stick online, or people object to something we have posted, and that can be quite stressful too. Especially when it’s just me trying to be funny. You can get it very wrong on social media but hopefully most of the time we get it right. My advice to diabetics would be - Never tweet if you are below 5.0. Low blood sugar levels really affect my judgement and judgement is everything in my job. 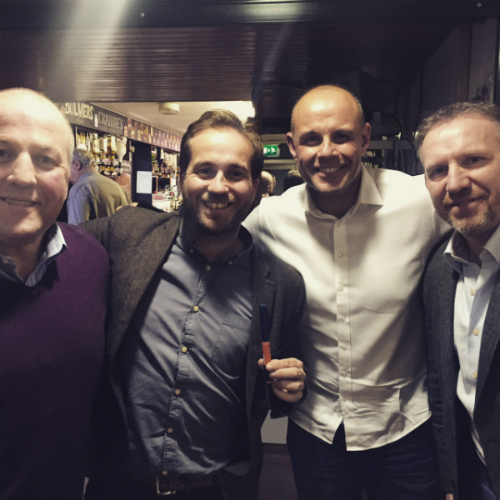 The main guests arrive. All black legend Ali Williams, Scotland's Andy Nicol and our regular pundit Martyn Williams. I chat to them about what we’re looking to talk about on the programme. Martyn has played for Wales 100 times and won 2 Grand Slams, Ali has won the World Cup, so it’s quite daunting telling them what you want from them. Especially if you are worrying about your sugar levels. There are snacks in the green room, they are supposed to be for the guests but it’s always me eating them!

I get a call from the Wales women’s team manager…they have just beaten Scotland in Neath...4 of them are guests on the show tonight, but they have only just got out of the ice bath and now they are driving up the M4, it’s going to be touch and go if they make it. 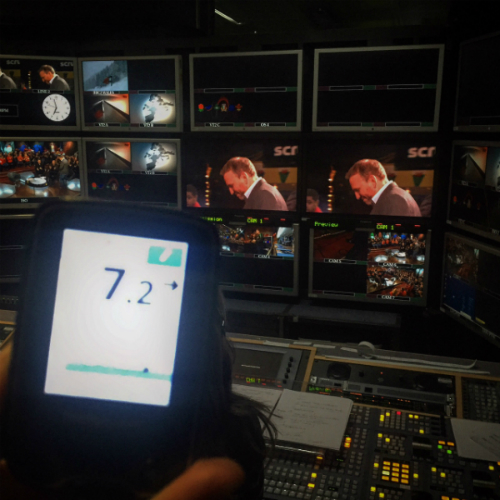 By 7pm I’m in the back of a lorry. That’s where our studio gallery is. Inside a big truck parked in the BBC car park. More glamour. I missed rehearsals because I was running around trying to find guests. But fortunately our director Nerys is totally in control of the technical side of things and as the production assistant counts down..10, 9, 8, 7…I check my blood sugar - its 7.2, that’s ok.

I put my headset on, wish the presenter Jason Mohammad ‘good luck’ and we’re on air…I breathe a sigh of relief and I peel a tangerine. That should help get me through the next hour.

For the next 58 minutes we take turns to scream and shout, I suggest questions to Jason, tell him when to move on, when to keep talking, feed him stats and suggestions, the show is full of action, and music, and laughs, and stats, and highlights and analysis. Garin Jenkins is a brilliant ‘Star at the Bar’, the Wales Women make it just in time, the studio audience are really lively and when the end credits roll and my name flashes up I still get really excited. It’s such a privileged job, and I think having diabetes has made me appreciate it even more because I have to be more organised, I have to think every hour about how I’m feeling and how I’m coming across, and if I’m making the right decision...which maybe I didn’t always do before. 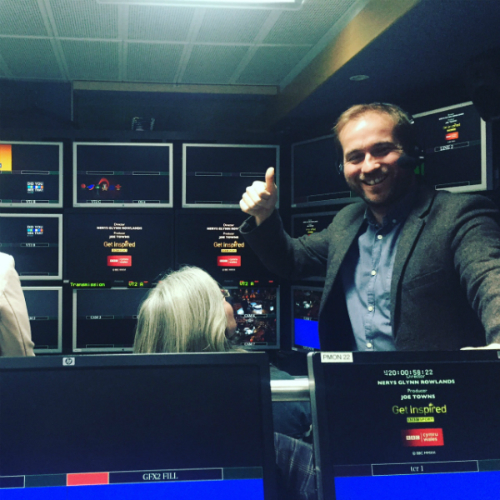