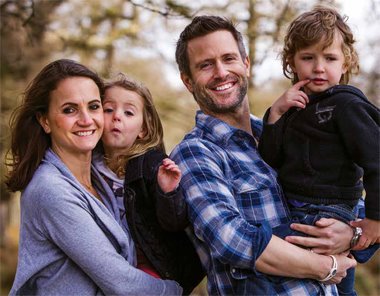 When Amelie was diagnosed with Type 1 in September 2011, the last thing Luke and Jude expected was the same diagnosis for her twin brother Albie just before their third birthday. After all, the risk of Albie (a non-identical twin) having diabetes too was just one in 10.

On reflection, Jude and Luke describe their initial reaction to Albie’s diagnosis as quite simply shock, but – immediately – they knew what needed to be done. “In some ways that was the same for Albie – he’d been watching his sister have injections for six months,” explains Luke.

In contrast, when Amelie was diagnosed, as well as being, as they describe it “so upset for Amelie”, they felt overloaded with information and worried that they’d never learn what to do.

But, Jude says, “It soon became second nature.” One Type 1 diagnosis can be overwhelming for parents, let alone two within six months. Despite this, Jude recalls that they didn’t feel too daunted, even though it’s a lot more work. “Straight away we began carb counting. Since it’s already Amelie’s routine, Albie knew what to expect. It’s almost as if he was waiting for it to happen.

For all these reasons he adjusted quickly.” Both agree that at least the twins are in it together and can support each other as they get older, particularly at school. And they’re getting equal attention, too. Luke feels that in some ways it’s a blessing. “It would’ve been tough having one twin with Type 1 and the other without.”

Caring for twins with Type 1 is hard work. Like so many parents in the same boat, injecting is the toughest part for Luke. “When your child cries in pain or against having an injection it’s really hard. I feel terrible for hurting them and I just wish I could take it away from them. Trying to control their levels when they’re poorly, growing, or simply being active is always a challenge.” For Jude, the hardest part is how the twins’ health is always on her mind. 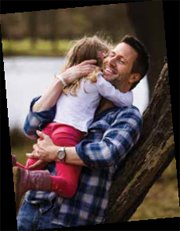 “You have to watch everything they do and always be there with them. You need to be superorganised, ever prepared and ever mindful. I can’t just leave them for a couple of hours like other parents.” Happily, Jude’s circle of friends has been hugely supportive. One friend has already learnt to test and inject and the others are planning to follow suit. Despite their condition, the twins are typical 4-year-olds. Amelie likes princesses and pink, while Albie’s mad about football – and they both love swimming. And the fun doesn’t stop there.

Adored family pet Teddy, the Labrador, is both a great life-saver. Next year, the Suttons are hoping to train Teddy to recognise blood glucose levels. “He’s a big teddy bear. You can guess who chose his name!” laughs Jude.

Getting the balance right

Most families struggle to keep a work-life balance at the best of times. Not surprisingly, the twins’ condition has impacted on the Suttons’ careers to some degree. Jude hasn’t worked as much as she could have because she wants to be at home for the twins. As a freelance production assistant for Sky Sports, she’s able to work “as and when”, fitting things around the twins. “We compare diaries and if Luke and my mum are away I just have to say no,”

Jude explains. Luke played cricket for Derbyshire and reached captain before deciding to retire in 2011. His ongoing battle with depression and anxiety played a part in his decision, as did his hand surgery, and Amelie’s condition. “Amelie was already diagnosed when I retired, but not Albie. We had a lot of tough things in our lives at the time and Amelie’s diagnosis was one of them. But it was the right time to retire, regardless of that.”

Nowadays, Luke is founder and a director of Activate Sport, which offers sport, activity and adventure holiday courses for children aged 5 to 16 across the UK. The practicalities of daily life for the parents of children with Type 1 can be complex, but it’s something that the Suttons have got to grips with. As Luke puts it, “It becomes part of your life.

Now we don’t think twice about always making sure we leave the house with testing kits, injections, snacks, etc. It’s not easy because our twins are very young, but it’s manageable.” Special events like birthday parties can pose a particular challenge. “Most kids’ parties have sweets everywhere, which is so hard to control for the twins,” says Luke. “They see it as unfair when they can’t eat something and someone else can.”

Fortunately, it’s getting easier as the twins understand their condition more. “I’ll just say: ‘Put the sweets in the hypo box for later’,” says Jude. At a recent party, the twins happily handed their lollies to an adult with no fuss. The twins’ own sport-themed fourth birthday party was a sugar-free event with aerobics and obstacle courses – and cake at the end. “It was so calm! There were no tears or tantrums,” says Jude.

The twins start school in September and Jude is anxious, even though she’ll always be on call. “I’m sure the teachers will be nervous. It’s a big learning curve. They’re educated about diabetes but don’t have hands-on experience of physically In it together » injecting and testing,” Jude explains, adding that she’s going to do some training with the teachers over the summer to make sure that they’re fully prepared to test and inject. “At least the twins know when they’re low and can test themselves now.”

Looking back, Jude’s full of praise about the care they’ve received. “I can’t fault our care. I know people complain, but we feel lucky to have the NHS. Our diabetes nurse, Jenny, has been amazing.” Luke agrees, but acknowledges “the treatment of diabetes has a long way to go”.

For both these reasons, the Suttons do as much as they can to support Diabetes UK and they aim to help with a local event every year, while Jude recently raised £220 from her cake sale at the twins’ nursery sports day and £700 from a clothes auction.Both also tweet about diabetes and have attracted nearly 6,000 followers. Life’s busy for the Suttons, but they keep positive. As Jude puts it, “Life just became different, not worse”.