Martyn lost his driving licence due to night-time hypos

Martyn Lloyd Kelly is 29 years old. He was diagnosed with Type 1 diabetes aged four and has been driving since he passed his test 12 years ago. His licence was revoked in 2013 due to two night-hypo episodes. He wasn’t able to appeal the decision and had to wait a year and a half before being able to reapply for his licence. Martyn lives in Liverpool. 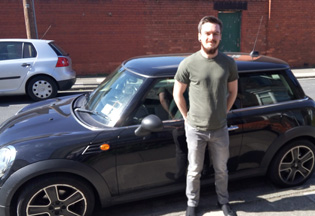 Martyn evenutally got his licence back

"I manage my Type 1 diabetes well and have never had any issues with my driving.

There have been occasions when I’ve had severe hypos when asleep due to stress, which my girlfriend has helped me to recover from, but I’d never thought to inform the DVLA as I didn’t think it was an issue with them happening in my sleep; I have excellent hypo awareness when conscious.

I’ve never felt like my diabetes has held me back before and I’ve never let it. When I was younger, for example, I was heavily involved in the school athletics clubs, so losing my driving licence because of my Type 1 diabetes made me feel disabled for the first time.

"However, when my licence was up for renewal in late 2012, I declared my night-time hypos on the DVLA renewal form just to be on the safe side. I didn’t think anything of it at the time so I was completely shocked when I received a letter from the DVLA some months later stating that my licence had been suspended due to my night-time hypos and even more so when I realised that there was no room for clarification/discussion of the context surrounding them.

"I don’t pose, and never have posed, a risk to other road users as I have excellent hypo-awareness when I’m awake so to me their decision was completely uncalled for. I tried to explain my situation to the DVLA, but trying to get through to them on the phone was a nightmare and when I did speak to someone they didn’t consider my argument worthy of further discussion, i.e. these hypos should not impinge on my fitness to drive since I'm conscious when I drive and I only have severe hypos when asleep because my hypo awareness is absent when unconscious.

Despite asking multiple times to speak with the medical department at the DVLA (where I was told some further discussion may be had about the decision), I never got through to anyone who could help.

"I have friends and family all over the North West so not being able to drive stopped me seeing them as much as I’d have liked. I also drove to work, so had to take taxis to get to external meetings and appointments. Luckily my employers were supportive and reimbursed my taxi fares, but it made things quite difficult.

"I’ve never felt like my diabetes has held me back before and I’ve never let it, so losing my driving licence because of my Type 1 diabetes made me feel disabled for the first time. The DVLA's refusal to listen to my argument only made the situation worse, I felt utterly powerless and even discriminated against.

"I tried to get some publicity on the issue as I was worried about other people with diabetes having the same problem. I started a petition on Change.org that received over 1,600 signatures which called on the DVLA to modify the legislation regarding severe hypos so that the types of hypos that should be listed is better explained and that asymptomatic nocturnal hypoglycaemia is discounted in their decision-making.

I was also contacted by local media and began posting on lots of diabetes forums and making YouTube videos regarding my case. I got lots of support and advice from people with diabetes, but a large majority of them, like me, didn’t realise that the policy was so strict and non-negotiable so I’m glad I was able to raise awareness.  Unfortunately, I learned that the DVLA's strict policy had caused some diabetics who drive for a living to lose their jobs and, even worse, their confidence.

"I had to wait for a year and half before I could reapply for my licence, and it was eventually reinstated towards to the end of 2014. I was overjoyed to get my licence back but I think the whole situation has been completely unnecessary and it caused me a lot of unnecessary stress and anguish.

"It is really good news that the European Commission has asked the DVLA to lift its ban on driving licences for people who have night-time hypos, but I would like to see the rule change implemented as soon as possible. I would hate to see any more people go through what I’ve experienced."

It is because of stories like Martyn's that we are campaigning to change the rules about diabetes and driving and make the system fairer.

Find out more about the campaign and how you can help.