When three-year-old Mia was diagnosed with Type 1 diabetes, her nursery and family friend joined forces to raise money for Diabetes UK. 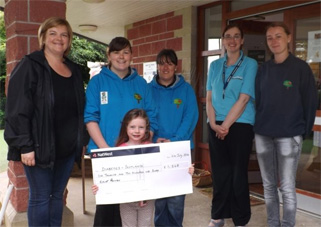 Sara Goss and her partner Paul Melvin live with their children Mia and Finn on the Isle of Bute, on the West coast of Scotland. Here, she tells her story of how invaluable their local nursery were in the months following Mia’s diagnosis with Type 1 diabetes in 2013.

“We took Mia (then aged three) and four-year-old Finn, out for a big trip to Edinburgh by public transport one weekend last March. We dragged her to the Commonwealth pool, a hotel pool, late nights, too much sweets - you name it.  In hindsight, she was skinny, pale and pretty lethargic that weekend.  We visited a new doughnut shop, and one bite of Krispy Kreme, she was passed out (asleep).

“We got her home on the Sunday night and she was really sick with diarrhoea.  She was pale and listless and so ill I put her on a mattress next to my bed throughout the night.  She seemed to rally the next morning so I agreed she could go to her granny's along the road.  “She wasn't hungry,” said my mum, “All she wanted was orange juice, she drank loads!”

“Mia was now peeing every 20 minutes, and drinking huge amounts of water.  At the health centre, she drank a huge glass of water in the five minutes we had to wait.  I kind of laughed, thinking it was an infection, hoping for the best outcome - as you do when it come to your kids. We were sent immediately off to the hospital in Paisley.  We were there for seven nights.

“Both Paul and I are self-employed on the Isle of Bute. We had to take turns staying over and learning all about it - our new life with Type 1 diabetes. I run a guest house, and Paul is a stop smoking therapist.  We were also a number of months away from opening a brand new restaurant on the island which we were completely re-modelling.  It was like the biggest blow you could receive - a sick child.

“How did we cope?  Honestly, the truth is not very well.  Paul went off and researched everything about diabetes, Type 1 and 2, that he could, and has a better knowledge of the illness than most people.  He became so involved in understanding diabetes and the effect of carbohydrates and what it does to the body, he is now training to become a nutritionist.

“But at the time and for many months after he was really angry.  It felt like grieving for the healthy child you had, and being realistic about what you now had to deal with - a child with an auto-immune disease that basically needs hourly monitoring.  As her mum, I was supposed to be good at looking after her, and I kept getting it wrong.  Handling it, I would forget to give her insulin at meal times, silly things.  Keeping records was hard work, remembering to re-order her medication etc.  It just seemed like a huge task in lives that were really, really busy.

“Now we handle it better.  Mia is a true star about it - as many young kids are, she takes it all in her stride.  She's on a pump now, and it makes handling it a bit easier.  We don't have a lot of family help with her, as our parents are too old to handle the pump, so she's never away from us for more than 2 hours.  But the nursery were fantastic, and thank goodness they came out fighting for her, as she was able to stay at nursery, and we were able to get on with our daily lives.“The nursery were a bit nervous about it, but they were fully supportive.  They got in touch with the Diabetes Team and have gone through three training sessions, and can handle a child with diabetes either on the jags or the pump.  Many of the girls came forward and asked to be trained up too.

“In hindsight I didn't really appreciate JUST how much they helped.  They could take her all day without us having to worry.  They still are the only place she can go for more than two hours without us having to be there and give her insulin. Thank you Appletree Nursery, you have done yourself proud.”

Christine McArthur, a friend of Sara’s, decided to raise funds for Diabetes Scotland in support of children like Mia living with the condition. Christine cycled 100 miles from Wemyss Bay to Stranraer in a day, and with the help of friends and Appletree Nursery, managed to raise a fantastic £1268 in sponsorship to help the charity care for, connect with and campaign alongside people living with, and at risk of, diabetes.