My New Year's resolution has become part of who I am 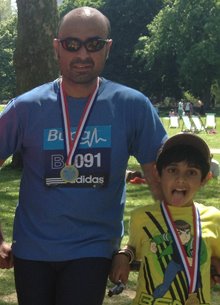 "Okay I am being honest, I didn’t make any specific resolutions apart from the one we all have - to get fit and lose my man-boobs.  I resolved to this towards the end of 2012 having being inspired by the Olympics and Paralympics and the thought of hitting the pool at a trendy hotel to celebrate my wife’s birthday later this year - no pressure.I run and have done a few 10K races but I am also trying to vary the exercise and instead of just working out in the gym, I am doing more classes to mix things up a bit and escape the harsh winter weather. For me, running is hard work; rewarding; and calming.

I first started running just before I was diagnosed with Type 1 diabetes. I wanted a challenge and so bit the bullet and entered a 10K much to my wife’s surprise as I had been talking about it for ages. At first I was hopeless.

I can still remember doing 800m on a treadmill in about 10 minutes and feeling like I needed an ambulance. However, I had set myself a challenge and being a stubborn Yorkshire man I plugged on.  I got a bit quicker and I started to lose some of the post wedding contentment bulge.

I then ventured outside near my home and on my own as I didn’t want to embarrass myself.  It was a short route but hard enough for a newbie.  I ran the same route a few times and very gradually it got easier and I got quicker.  As the days got longer I started to run in the mornings and the evenings.  I started to see some improvements both mentally and physically.

My first 10K came and went.  I was pleased that I had completed it as I had never done anything like it before.  At school I had been the tubby kid at the back struggling to walk, never mind run.  I ached for a few days, but it was worth it.  Pain is temporary, but glory is forever !  Then I started to think about how I had done.  I had completed the race in one hour and six minutes.  I started to think that I could go quicker, and, I wanted to go sub sixty minutes.

I entered the same 10K the following year.  This time my base fitness was higher and I trained harder.  I went for runs more frequently and started to make them longer. Some days were easy, some days were hard. The 10K came and I went sub sixty minutes.  WAHOO !

Could I go even faster ? I was bitten by the running bug.  I started to rope in some of the dads where I live to enter 10K races, and they did.  It became a social and competitive event with our families meeting us at the finishing line to cheer us on and celebrate our efforts.

I have run around Hyde Park, the West End and the City.  I have started a race on the pitch at Wembley.  The sound of the crowds cheering is amazing, seeing the fantastic sights of London and beating the cocky young kid in front of me.  Oh, and I have raised money for charity.

So, what’s the benefit of all this exercise? The medics are happy that I am exercising, so that’s one less thing for them to moan to me about. Closer to home my Rapid insulin dosage is noticeably lower.  My heart rate has dropped to about 50-55 beats per minute.

My blood pressure is now normal; it had been just above the normal threshold.  My weight is relatively stable; although it does vary with the extravagances of Diwali or Christmas.

I won’t stop running or exercising it has become part of who I am.  It confuses my sister who doesn’t understand why I can’t meet her for lunch as I am at the gym or out running.

My wife is pleased I am trying to look after myself and is sometimes surprised how much I do. My kids, they see it as a part of my weekly routine, so hopefully they grow up knowing that exercise is a good habit. It also gives me the stamina to keep up with them as we all get older.  However, most of all, I want to look good on holiday later this year."